The Sounds, Natalia Kills and Antonio Banderas... perfect together

Sometimes the suburban man needs to step out of his comfort zone.  That could mean an hour or so in the Nordstrom shoe department.  Maybe your personal hell is waiting in line at the grocery store?  Or being in the grocery store altogether?

Those moments can also provide an unexpected treat.  Perhaps your daughter finds a pair of shoes that signify her maturity.  Maybe you find a zen moment in the cereal aisle hearing a piped in song from the past.

Friday night this suburban man once again found himself in Webster Hall, NYC.  It is the oldest concert venue in America's finest city.  It has charm.  It has ambience.  It has tremendous character in addition to its exceptional acoustics.

And for a few hours it was dance/rave central on a bill that included The Limousines, Natalia Kills and headliners The Sounds.  Comfort zone very much tucked away.  Fish out of water very much in play.

You know what?  Not a bad place to be.

Natalia Kills, it was learned, is a 20 something Brit songstress somewhere between Katy Perry and Lily Allen.  Confident and brash she pounded out some candy pop with a touch of edge in her 30 minute set.  You know you are old when the lead singer asks "Anybody out there have a boyfriend or girlfriend?) Kills was on the bill supporting their debut album Perfectionist.   Lots of energy and fun mixed in with the whoa is me when will I find love routine.  Kills has a sound that could easily fit between Gaga and Adele on your FM dial. 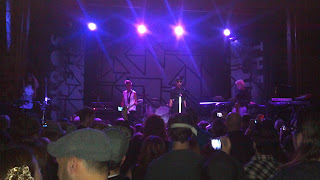 Oklahoma City "music project" Kids at the Bar handled the music in between sets.  They are, simply put, two white boys with computers and beats.  Mixing and sampling contemporary dance tracks much to the delight of the 20 something, arm waving crowd, Kids at the Bar were a nice diversion from the house music that usually transitions band to band.  20 minutes might be a bit too long for said diversion.  How much duunnshh, duunnshh, duunsshh can you take?  Unless of course you are on X, which is a different story.  For more on Kids at the Bar: http://kidsatthebar.com/ 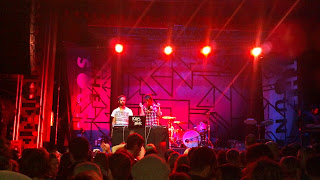 Swedish dance/rock outfit The Sounds came on promptly at 9pm and proceeded to bring the groove.  From the moment singer Maja Iversson pranced on stage, smoking a cigarette, the stage was all hers.  A true leading lady with all the sexiness and persona of today's finest actress.  Picture Kate Winslet with a microphone and attitude.

Oh, and she can sing too.  He vocals were most notable on her new single "Dance with the Devil" and the 80s throwback "Something Worth to Die For" and "No One Sleeps when I'm Alone."  Around since 1999 it was most apparent The Sounds are a close knit and polished group.  If you ever found yourself tapping your feet to Pat Benatar, or Blondie, or Human League...  take a listen.

"Dance with the Devil" http://www.youtube.com/watch?v=kQS8kEAhdHc  Overly dramatic and campy but Iversson is smoking hot (and undressed.)

"No No Song" http://www.youtube.com/watch?v=HXXiatbQM8Q&feature=related   The Strokes meets Scandal.

"Something to Die For" http://www.youtube.com/watch?v=B1Efwi916U0  Live version from the Gullfisken Awards earlier this year.  What, you never heard of them???  The Sounds= the Nordic Beatles.

"No One Sleeps When I'm Awake" http://www.youtube.com/watch?v=Ksj2FqOSt2I&feature=related  A good live version and probably their finest song.  If you love 80s pop please tune in.

For more info on The Sounds: http://the-sounds.com/ 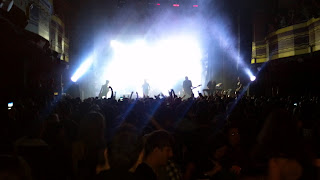 Finally, a moment about this weekend's box office.  Turns out the Antonio Banderas vehicle Puss in Boots beat out Tower Heist with an impressive $32 million haul.  It's a shame folks will not be pouring their money into Banderas' other current film, The Skin I Live In.


It is easy to forget Mr Banderas was a suave and daring leading man for acclaimed director Pedro Almodovar long before his puzzling marriage to Melanie Griffith and feline Shrek character.

In The Skin I Live In he is once again teamed up with Almodovar and the results are fabulous.  Based on the novel Tarantula, by Thierry Jonquet, it is a tale of suspense, romance with same biting humor that has defined Almodovar's career.  You don't want to laugh, but sometimes the absurdity (and plausibility of it all) are too much to take.

Banderas plays a surgeon with immense skills and unparalleled bad luck.  Those two worlds inevitably collide with monster truck force.  Almodovar, as is his want, fills the screen with lush colors and bold, beautiful locations.  His classical music soundtrack is spot on too.

But this is Banderas show and he steals it.  Every moment is very much calculated and controlled, whether it is torturing someone or caressing them.  His steely glance dominates the screen.  Folks made a big fuss about Travolta's return to form with Pulp Fiction.  That's easy...  play a stoner and dance with Uma Thurman.  Who couldn't do that???

Banderas turn here is a commanding return to form and should remind us all why we know his name in the first place.  And it ain't cause he laps milk for Dream Works.

Plenty of plot twists and other details that could go into this review but why bother.  It's playing on about 5 screens nationwide so look for it when it comes to DVD/On Demand.  Think The Crying Game meets Dead Ringers meets Human Centipede.  Really, that is not much of a stretch.