Sometimes the Pursuit Exceeds the Goal

14 years ago today an Elvis impersonator walked a young woman down the aisle in Las Vegas.  She was young, probably too young to understand the magnitude of the situation.  Her husband is still very young (mentally/emotionally/financially) and rarely understands the magnitude of ANY situation.  Without question this was a match made in heaven.

It is still unclear if there was ever a proposal.  Her husband contends he asked, like a gentleman.  That fact leads to considerable debate.  Both parties agree they saved for months to buy an estate ring prior to the event.  She still wears the tiny thing, without a worry, and, at times, with a little glee.

For a series of reasons they just decided to throw caution to the wind.  They were in love.  There was a feeling of comfort, of understanding, and of peace.

Vegas was the only natural choice to house such a impulsive and seemingly irrational decision.

The thing about that trip that stick out though is not the wedding.  That, like so many events after, was but a moment in an otherwise fantastic journey.  As film lovers the couple thought they should spend a few days at the Sundance Film Festival while they were out west.  Some friends had moved to Utah the year before so they had lodging.  The experience of walking through Park City in the snow, rubbing shoulders with celebrities, seeing World Premieres, drinking 3.2% ABV beers are forever etched in their minds.  They went there with an open mind and brought home a world of new interests, new passions, and new memories.

And today, they try to capture that same magic as year 40 stares them right in the face.  That means, after the craziness of trying to do business in NYC (in a brutal market, within an unconventional field they are less than passionate about), raising a child, living in an affluent area, and otherwise trying to stay above water, they still take the time to search out adventure.

Last night they had a concert on the agenda.   Caveman were playing Bowery Ballroom for their first headline show.  An exciting band at a cherished venue on a cold City night.  Not unlike Park City during the festival.  They have their 2 weeks.  NYC plays that game 365 nights a year.

They are older now so their pre-show culinary knowledge is provided by Guy Fieri.  Say what you will about his personality, hair, and mere existence...  his job kicks ass.  Where else would they have heard about The Redhead (http://www.theredheadnyc.com/).  Head to 13th St and 1st Ave should you desire good ol' fashioned southern food.  Hush puppies, fried chicken, homemade chips, home-made soft pretzels with an amazing beer/cheese dipping sauce coupled with a warm, cozy bar.  Throw in a friendly staff and beyond fare pricing for good measure.

Age is still very much in play on journeys like this.  For one, when a parking spot is procured (last night directly outside the restaurant (and free) you never want to leave it.

Secondly, the practical thinking that goes into keeping a good parking spot, does not go into other decisions during the evening.

20 block walks are nice.  They provide a glimpse into neighborhoods you might not be acquainted with.  But they can wipe your ass out by the time you reach your destination.

The stops along the way for a drink (you know, to get warm) don't help either.  Your legs and lungs are not 20 years old anymore.  Neither is your liver.

On occasion the night is going to come to a screeching halt.  Security guards, cabs, and buckets tend to make an appearence.

And the next morning you throw your hands up and say "great time."

Stepping out of the comfort zone.  Living.  Taking steps very much out of the ordinary.

It is all we have left.

But does it have to define who we are?

It would have been tremendous had the group been stage side last night for Caveman's set.

But that act has been seen before, and can (WILL) be seen again.

The events leading up to the brief time spent at Bowery were more important than any song not heard.

As is the time spent arm and arm lying in bed.  So too, the lazy Sunday mornings watching CBS and drinking coffee.

The everything.  The nothing at all.

14 years today 2 kids made a life altering decision.  Countless mistakes, misgivings, and utter turmoil have threatened to destroy the union.

But through it all those kids who screened the aptly titled "I Married A Strange Person" (http://www.imdb.com/title/tt0119346/)* in Park City years ago, defy the odds.

They are coming to the realization perfection does not exist.  You can, however, be perfect for one another.

Before bailing on Caveman the trio Heaven played an inspired set blending familiar 80s sounds with good melody.  Keyboards and solid drumming provided a strong bass line.  There is little on the web about this band but they are certainly on the radar now.  They could use some styling or production management because the guys look far different than they sound.  Make sense?  Sometimes ill fitting or poorly designed clothes are jarring.

Either way their set was very polished. 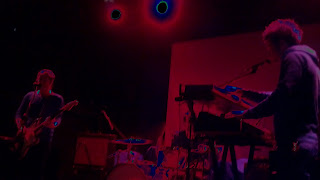 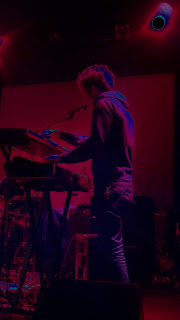 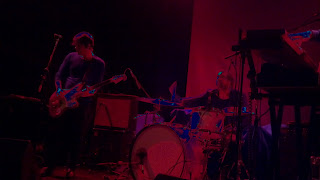 London duo Au Palais (who hail from Canada) followed Heaven.  An Apple Computer playing "mixer" and a singer seems like an odd choice between a rocking band like Heaven and Caveman.  The crowd was lukewarm.  The performance was fair.  That was it.  It would have been far better had Caveman come on at 10. 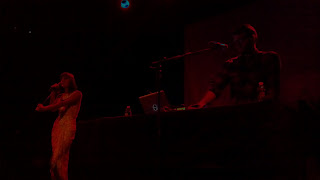 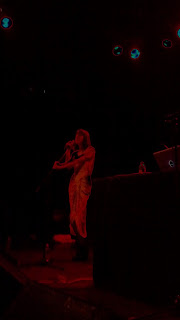 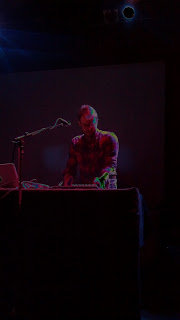 * Brilliant clips from the animated movie.  Yu might remember Bill Plympton from his MTV shorts many years ago.  Or was it Comedy Central?  Whatever, they are good.

"Would You Love Me?"  http://www.youtube.com/watch?v=BIaWQC7nQKQ

"How'd You Get So Cute?" http://www.youtube.com/watch?v=ZDhkBKluJU8&feature=related