About 10 seconds into Foo Fighters opening song last night, "Bridge Burning" from their new album Wasting Light, the message was very clear:  Dave Grohl is the consummate rock star.  He should not be trapped behind a drum kit.  Although, he does that very well as evidenced by his time in Nirvana and more recently drumming for Cage the Elephant when their drummer took ill.  Also, it should be noted,  the Foo Fighters drummer Taylor Hawkins is both an exceptional musician and beyond competent frontman/rock star.

This is Grohl's band though.  And last night he gave his fans all they could want, and more.  He attacked the stage as furiously as he did his guitar and vocal chords.  He commanded your attention and quickly informed the packed house:  "Just wanted to let you know you are at an Arena Rock Show!!!  We don't play an hour and a half and get out.  Text your boss and say I'm not feeling well.  It's gonna be a long night."

Indeed.  Dave Grohl is America's great rock star.  Had Kurt Cobain lived you can't help wonder how they would co-exist?  Is there a more energetic and charismatic performer working these days?

Foo Fighters plowed through an impressive setlist (http://www.setlist.fm/setlist/foo-fighters/2011/prudential-center-newark-nj-13d1f9dd.html).  They nailed classic tracks, like a freewheeling, jam-filled "Monkey Wrench", "My Hero" and the rocking 1st set finale, "All My Life."  There new tracks, namely "These Days" and "Walk" were welcome additions to an impressive resume.  Grohl runs from stage left to stage right like a tiger chasing his prey.  He roams around eliciting crowd reaction and participation.  He makes eye contact with awe inspired fans.  He is always in command and you can't take your eyes off him.  Oh, and his voice is amazingly strong and guitar work equally impressive.

There will forever be regrets missing the final (4!!! of 6) encores including a cover of Tom Petty's "Breakdown" and their classic "Everlong."  But so it goes when you attempt the mini-van roadtrip.  6 different humans bringing unique circumstances to a Monday evening rock show.  Mother of 4 sipping the Sangria pre-show.  Longtime buddy who took a sick day today and was prepared to stay up all night.    Wife worked a half day in NYC and then right back out to stand for 5 hours.  We should have either taken 6 cars or had called a personal driver for each of us.  Maybe this reality/virtual tour is not such a great idea.  Some drink.  Some don't.  Some rock.  Some roll.  Some want their couch the moment the clock strikes 11.  Who can blame them???

The floor at an arena show like this can be quite daunting for a 30, er 40 something.  There are 18 year old kids in there!!  And they can be quite aggressive.  Although I was impressed with a few teenagers who were able to roll a joint while standing up in and around a mosh area (stopping short of calling it a pit.)  Thing is if you leave to catch a breathe you can never get back in.  And when you are not on the floor for the show you really aren't experiencing everything.

Grohl and his mates (Nate Mendel bass, Chris Shiflett and Pat Smear guitars and Hawkins) give the audience a lot to experience.  Should you have half the energy next time they are in town take a look.  But make sure you have an overnight sitter.  In the meantime watch them perform "Bad Reputation" with David Letterman this evening.  And also check out the following resources. 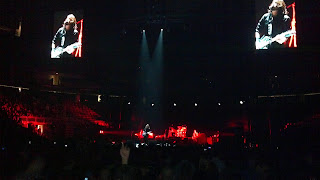 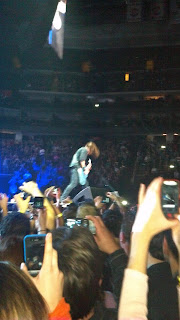 We arrived early mainly because the Wales trio Joy Formidable opened last night.  There 30 minute set has gotten much tighter since they took the stage earlier this year at Webster Hall.  What surprised me is how this heavily bassed band filled the enormous Prudential Center with sound.  Ritzy Bryan (guitar/lead vocal), Rhydian Dafydd (CRAZY LOUD bass and vocals) and Matt Thomas (drums) play with an anger and urgency that is hard to ignore.  Bryan sings "You make me sleep so badly/Invisible Friend" in their biggest hit "Whirring" from the debut album The Big Roar.  The irony is anything Joy Formidable plays could never put you to sleep.  And they, like their sound, are anything but invisible.  You should have such friends. 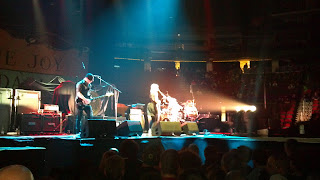 Social Distrotion were the middle band last night but they should hardly feel slighted.  Formed in 1978 Fullerton, Califronia co-founder Mike Ness and his boys can be defined rather easily: professionals.  After losing their other founder Dennis Danell in 2000 due to an aneurism the band carried on and continue to perform, and perform well.  It is Ness's scrappy voice and bluesy guitar licks that stand the test of time.  They spit and clawed through a 40 minute set touting their new record but with an eye on their history.  Their cover of Johnny Cash's "Ring of Fire" was spot on rock-a-billy goodness.  Cheesy rock dictionary defines Social Distortion as "pretty darn cool."  Agree. 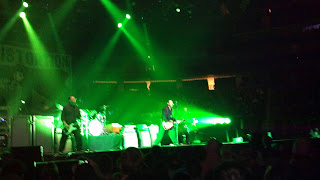 
Should be noted that the evening began at Forno's of Spain in Newark's http://www.fornosrestaurant.com/) Ironbound section.   Much can be made of the problems of Newark, and there are many.  The Prudential Center is quite nice and Forno's is a nice dinner/pre-game spot.  Spanish tapas and sangria served by old school wait staff eager for you to leave.  What's not to like?  Try the Veal Siciliana, Red Sangria, Osso Bucco, and even the chicken fingers!!!  They can easily accommodate an 6 or 8 top.  But if you just want a drink the bar is ample.  Slip the valet a 10 spot and you can walk to the Pru Center too if weather permits.  This way you can experience the urine smelled streets of Newark post show.  Nothing like the sobering realities of crime and poverty that await you after spending $12 bucks on 3 coffees moments earlier.

Lykke Li in 2 days...  Ugh, need about 24 hours of sleep first.  And for my cat to not wake me up with grim reaper fearing yells and vomit sounds.  Not bloody likely.


Check this out...  http://www.youtube.com/watch?v=KT1oPhF5KyI&feature=related   some footage from the show my friend assures me he is in...  he was on front row for sure so let's take his word for it.  He's the guy with his hands up and bald head around the 4:50 mark.