About mid-way through Swedish rocker Lykke Li's set it occured to me, Europe seems to have cornered the market on female angst-ridden rock stars.  In fact, other than a few exceptions, Alanis Morrisette and Karen O from the Yeah Yeah Yeahs for instance, the US seems better at producing pop women as opposed to alt women.

And make no mistake, Lykke Li is an alt women.  After a 5 minute pulsating light and smoke machine intro Li and her bandmates went about hypnotizing the surprisingly large New Jersey crowd with a mix of tribal percussion, haunting melody and raucous fun.  Performing in support of her sophomore LP, Wounded Rhymes, Li kept the between song banter to a minimum.

At one point there was some debate if the crowd was attending a rock show or some crazy coven ritual.  Dressed in an all black Free People-esque outfit that might find it's way in Stevie Nicks' closet Li has all the markings of a high priestess looking for her next victim.  She would fit right into a 70s Christopher Lee flick.   Had she asked me to eat the brains of someone toward the end of the set I would have considered it.

Oh, and the sound is pretty darn good too.  She is primarily known for the infectious and foot stomping "Get Some" which boldly asserts "I'm your prostitute/You're gonna get some."  Wounded Rhymes on record is a soft,  synth heavy mood piece.  On stage it has more elements of high brow concept pop meets 50s percussion-centric lounge act.  Li relies a lot on dark lighting and heavy strobes.  It is as much theatre and vibe as it is pop rock.  Her band layout is unusual too: drummer stage left and lead guitarist front stage elevated where drum kit usually resides.  At first, it was a little off putting.  Toward the end of the brief 80 minute show it made perfect sense.  Since there were at times three percussionists on stage they would appear to be waging war with the keyboard and guitars adjacent them.

It was a competitive battle and one worthy seeing again.  There was a 3 song ballad interlude that included her Righteous Brothers cover "Unchained Melody" that might have been 1 song too many.  Mainly because the songs before and after the soft stuff rocked so hard.  Her most notable, "Sadness is a Blessing", "Little Bit", "Youth Knows No Pain (which had Li singing through a megaphone... AWESOME!!!)" and "I Follow Rivers." 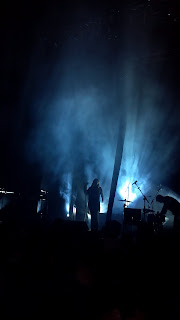 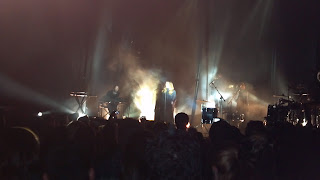 I was certainly a lesson in exceeding expectations.  She marks the third Northern European alt leading lady I have seen in 2 weeks (Ritzi Bryan from Joy Formidable and Maja Iversson from The Sounds are the others.)  The trend is headed markedly up.  The US does pop and auto-tune real well.  Think Gaga, Katy Perry, Kesha, Britney, and Nicki Minaj for instance.

Europe brings the goth, book reading, glasses wearing, eating disorder, angst ridden, female rocker far better than we do.  Think of it as your mysterious girlfriend.  You have Katy and Gaga all day, but when it comes time to let the hair down you can sneak into a club and watch the sultry mistress seduce you with her song, with her look, with her art.

Then you come home with the girl that brung you.  A better night than "Moneyball" or "Breaking Dawn" I can guarantee you.

"Unchained Melody" http://www.youtube.com/watch?v=_qoXm_CSdJo  Live acoustic version.  Showcases the beJesus out of her talent.  Voice and arrangement could slide easily into the worst David Lynch dream.  There is some Cat Power (ok she is American angst) sound in here.  If you take a look at one clip make it this.  Probably the best voice you have never heard.


Had a conversation with someone the other day who is probably a bit older than me.  He made mention of the problem he had with my music...  "I just don't get it."

Made me wonder why you have to "get" anything?  You take a chance on movies Friday nights don't you?  You talk yourself into thinking "Jack and Jill" or "Tower Heist" are going to be worth your investment (time and money.)  In reality, the event far surpasses the art.  You can call it a success because you were out of the house.

The music business is in a far trickier spot.  Movies are an institution and translate very well to the flat screens we all have in our living rooms.  We rarely if ever purchase 3 dimensional music anymore.  Music is increasingly mobile too, but at what cost to the artists?  They have to make money at some point or what is the point of carrying on?  An artists gotta eat, right???

Take a look at some of these venues and give a band a try.  Open your mind and allow yourself a different $100 Friday evening.  What's the worst that happens?  You get a good meal and some drinks in a different location and fail to latch on to a band?  No worse than a bad kids comedy at the Cineplex, right?  Best case is you become a fan of something/someone you would have never anticipated.

Some bands I have heard/seen (and would never expect to like a mere 2 years ago) and am now devoted fan:

St Vincent: "Cruel" http://www.youtube.com/watch?v=Itt0rALeHE8  Another in a long list of visually stunning and smart videos that are being produced today.

The Sounds "Yeah Yeah Yeah" http://www.youtube.com/watch?v=2cfSy4enIrE  You could argue a straight man should not be posting this...  fair enough

Wolf Gang: "The King and All His Men" http://www.youtube.com/watch?v=TZLv36LvRo8  Brit Synth reminiscent of 80s.  Foster the People across the pond??

Deerhunter "Desire Lines" http://www.youtube.com/watch?v=aW2jOA6uIaM  Bradford Cox did a stine last  dj-ing last week for Sirius XMU.  It was a glimpse into the mind of a very creative, very smart and very odd man.  Another live version of his best song from last years Halycon Digest.   Cox has the ability to excel in just about every genre.  It can alienate fans for sure, but one can't help being awe-struck with his ability.  This piece takes off around the 3:30 mark and does not STOP!!!


Enjoy the weekend folks!!!  Sorry for all the music but it has dominated my mind lately.  Good thing, cause it takes the stress of hearing Christmas music in early November.  Where did the year go???

Thankfully Thanksgiving is less than a week away.  It is the greatest Holiday (and not because I was born on it!)

May you get through the Holiday in one piece and eat like a monster.  If you are anything like me you have a LOT to be thankful for.