There is something to be said for Manhattan in the winter.  Gray streets and cold winds have a comforting feel for reasons unexplained.  Maybe it is all the people that ignore the elements and hit the town on foot.  It is a chance to hold a loved one close by and discover a new shop or a new restaurant.  Folks can go deep in their closet (or maybe their recent Christmas haul) and don their gay "new" apparel.  "How does this look honey?"  "Does this make my butt look big?"

The magic of NYC lies mainly in the unexpected.  This past Saturday, with a well executed plan in tow, it was the surprises that stood out.  It has me yearning for the next adventure.  It has wiped the bad taste of work in NYC and a cumbersome office move out of my mouth.  For now.  The key:  have more plans in your back pocket and go out and enjoy YOUR life at least once a month.

As my smart, funny, thoughtful and forgiving wife celebrates her birthday today I take solace knowing Friday night we will go out and explore again.  Happy Birthday T.  Like you reminded me this weekend:
"We will sleep when we're dead."

Had the notion to stay in the burbs for an afternoon film, but surprise #1 found us in the Angelika Film Center (http://angelikafilmcenter.com/angelika_index.asp?hID=1) in the West Village.  Long a  landmark of independent film, the place is a revelation on a cold, city day.

Nevermind the subway sounds heard above you and OBNOXIOUS/PRETENTIOUS crowd that surrounds you.  The Anjelica remains a great movie going experience.  Coffee and fine treats are available in their spacious lobby.  The popcorn is made very well.  And more often than not the film you are there for entertains and enlightens.

Or, in the case of We Need to Talk About Kevin, it frustrates, angers and mystifies you.  Tilda Swinton plays Eva.  She was once a adventure writer and travel expert.  She was once a carefree and daring woman.  Then she met Franklin (John C Reilly.)  Soon they had a child, Kevin (played by 3 actors.)

Say goodbye to carefree Eva.  She takes a hiatus from work and they first raise the child in their tastefully decorated NYC apartment.  Kevin has some issues.  He screams all the time (to the point Eva stops the stroller in front of a jackhammer to deaden the noise)  He refuses to play, or speak, or learn to use the toilet.  At times, when the two are home alone, the two engage in brutal mind games and outright battles.  Franklin denies there is an issue.  "He's a boy, that's what boys do."

Maybe not.  The parents talk around the problem.  Eva and Kevin communicate, but very rarely what they NEED to tell each other.  Communication soon breaks down.

And, as we see from Lynne Ramsay's flashback storytelling/direction, the consequences are deadly.

We follow Eva as she is left alone by tragedy.  She gets a menial job at a travel agency.  She has to contend with abusive neighbors, harsh living conditions AND the nightmares that have plagued her the previous 15 years.

Swinton is masterful as Eva.  You cannot call Ms Swinton underrated.  She won an Oscar for her brilliant work in Michael Clayton a few years back.  But to say she commands the screen is an understatement.   Swinton pours herself into this very sad, very troubled, but ultimately very good character.   Maybe because Kate Winslet is more attractive (and has the enormous success of Titantic on her side) that she gets more ink than Swinton.  For my money there is not a better leading lady working today.  And yes, I realize Meryl Streep is still doing amazing work.  It's like comparing Joe Montana and Alex Smith (today.)  Montana has his championships...  let the new kid get his.

Ramsay tells the first 15 minutes with an avant garde, experimental student film lens.  This erractic and jarring approach parallels the whirlwind all parents feel from marriage to raising a child.  "A blink of an
eye" they say.  It soon settles into a tighter form as Eva and the family desperately tries to keep it together.

Ramsay does a nice job building suspense.  We all know what is going to happen.  Yet, it is all so shocking when it does.

Like life, more questions than answers.   This fine piece of filmmaking wonders if answers can be found in the easiest places.  Communicating clearly to one another is a start.

The trailer can be found here:  http://www.youtube.com/watch?v=ZLRgAe2jLaw

Music:
The bands Girls, and more to the point, NJ's Real Estate, brought us to NYC in the first place.  They played to a sold out crowd at Terminal 5.

Actually, 17 year old Londoner King Krule started the evening.  This boy has gotten some big buzz and in his brief set he showed some promise.  He very much looks like he is in 13th grade.  But his guitar playing and swagger are very adult.  His sound is somewhere between cockney Stevie Ray Vaughn meets English new wave/Pogues.  Good stuff, but not overwhelming.  The teacher is going to have to see a bit more.  There were times it felt like a high school talent show. 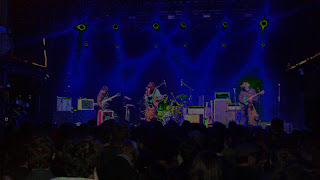 Real Estate hit the stage next and displayed far more polish.  Supporting their sophomore LP, Days, the suburban Jersey boys meshed soft, melodic guitars with easy vocals.  Martin Courtney and Matthew Mondanile have created their own play on  new wave, surf sound that goes down easy with the lacrosse/frat-boy set.  They opened with their two big singles, "Green Aisles" and "It's Real."  It was an odd choice as their final few tracks, namely "Out of Tune" and "Easy" had more energy to them.  It would have been better to hear the crowd rally around "It's Real" as they finished the set.  No matter, the gentlemen (filled out by bassist Alex Bleeker and drummer Etienne Pierre Duguay) did not disappoint.  Courtney's voice had a richness to it that was slightly different than on album.  What sounds like a different catalog to sing live was handled quite well.  There seems to be a nice upside to this band.  Don't be surprised to see then headline Terminal 5 in the very near future. 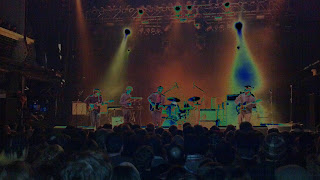 By the time headliners, Girls, took the stage around 10pm, 2 things were very clear.  1.  The floor was getting way too busy so we were going to have to head upstairs.  2.  We were not going to make it the entire show.

Girls released their sophomore record last year too.  Led by extravagant frontman Chrisopher Owens (sporting a denim skirt this night) they raced through "Alex" and the catchy "Honey Bunny."  The stage was littered with flowers and he had 7 folks behind him, most notably his 3 women background singers. 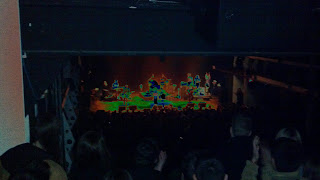 Terminal 5's sound, sometimes awful on the floor, is not so great upstairs either.  We made it about half way through and it had nothing to do with Girls.  Sometimes you take your winnings and cash in.

We got to tour the entire venue.  We soon found out Terminal 5 has an outside bar/deck.  There are 4 floors there!!  Very big indeed.  This is knowledge we now have since being bullied by the teenagers.  And it will serve us well our next visit.

Oh, and it afforded us the opportunity to see our friends band (The Project: http://theprojectnj.com/) when we got home.  There is nothing like the local bar/cover band to tie a bow on a wonderful day.  They play at 54 Main St in Madison, NJ here and there.  Bookmark this page and check them out:  http://www.54mainst.com/events.html  Or just get off your ass and go support your local band one of these weekends.  You can DVR Cops/America's Most Wanted.

King Krule: "Out Getting Ribs"  http://www.youtube.com/watch?v=L9wLrAtcd6Y  Slow, bluesy stuff.  Tough to look past how young looking he is.  Crazy in fact.  Probably his best track from the other night.
Real Estate:  "Out of Tune" http://www.youtube.com/watch?v=PlJ57Z0-1ug  My favorite from the other night for sure.  Here, a wonderful live video from a Barcelona show in November.  The guitar sound is so soothing.  Love the irony of perfectly tuned guitars in a song called "Out of Tune."

Girls:  "Honey Bunny"  http://www.youtube.com/watch?v=IxuDoYhQI2o  This is a self confident man.

Girls:  "Vomit" http://www.youtube.com/watch?v=ze6rg4ixjOI&feature=relmfu  Slow and eerie.  Lots of Alt bloggers had it in their top 10 last year.  It's got a little 80s hair band to it.  That cannot be a bad thing.  Got to be patient though.

Free parking might have been the highlight of the day.  Give a yell if you want to know how to spend the day parked on the street in both SoHo and Upper West Side at no charge.  It helps if you have a 97 Altima.

Join the conversation here and elsewhere:

Thanks for reading!!  Spread the word and share (often.)