An Evening In NYC, Grouplove and Young the Giant Edition

There is something to the opening chords of Grouplove's "Lovely Cup."  It is airy, melodic and eventually outright joyous.  It is built with a booming bass line (Sean Gadd.)  Soon the rhythm guitar and vocals chime in nicely (Christian Zucconi and Hannah Harper.)  Lead guitar/vocalist Andrew Wessen puts some energetic fills in just the right spots.  And rail thin (and by appearance ill fitting) drummer Ryan Rabin fires through his kit with laser like precision.  All the elements of energetic pop and rock play along wonderfully.  It is a brilliant track to open a set with.  It sets the tone.  It puts a smile on your face.  Each member has a turn to shine (as they did through their entire 40 minute set.)

Some bands take a lifetime to figure out how best to open their sets.  Some bands never make a record as strong as Grouplove's debut, Never Trust a Happy Song.  Born in both NY (Harper and Zucconi and LA (the rest) with a stop over in an artists residency on the Isle of Crete, last night at Terminal 5 Grouplove announced its presence with authority.

This isn't an Earth shattering revolution either.  Grouplove is built from a simple, yet effective recipe for success.  Think Stevie Nicks and Lindsay Buckingham circa 2012.  Ashford and Simpson meets The Band.  It's what Dave Matthews and Joan Osborne's kids' band might sound like if they formed a band.  2 guitars and a strong rhythm bass section.  A man and woman with strong and distinctive voices (that match their personalities.)

And an energy that is palpable.  Their were times during the sold out show (most attendees were their for the opener) the band members looked at each other with immense smiles.  Zucconi mentioned how just a few years prior they were playing to a 100 or so folks and living from/in their cars.  Here, back in the City that started it all just 3 years ago, they ignited a large crowd with spectacular maturity.

They played mostly from their LP save for covering Whitney Houston's "I Wanna Dance with Somebody."  That was both a nice touch and an effective follow up to their hit "Tongue Tied."  That song, played on an Iphone ad over Christmas and then given ample radio play, had the potential to be a let down.  How many times have you seen a band play the song they are known for and soon lose interest?  Not last night.  It had an added joy and pep lost in an ad shilling downloads.  A reminder of just how powerful the live experience can be.  When was the last time you left your feet and danced to a commercial?

The set ended with the dark yet charming power ballad "Colours."  It, like the songs before it, built to a wonderful climax of primal euphoria.  The bar was set very high.  Young the Giant never stood a chance.

Listen Up:
"Lovely Cup" live version  Hooper has a nice yodel thing working here.  Such a nice build up that leads to a wonderful payoff.  The absolute perfect way to start their set.  From here they had everyone's attention.

"Itchin on a Photograph"  Zucconi shares a similar voice with Cage the Elephant's Matthew Shultz's.  His range may be a bit stronger and he can go higher.  This track owes a little to Guster's "One Man Wrecking Machine."  Everclear's influence can be detected to.  A great pop song.

"Naked Kids" live acoustic  Take 5 minutes and look at this clip shot under a foot bridge in some park. You watch this and still want nothing to do with them then there is no hope.  Wait for the next blog post on politics or dogs.

"Spun"  Wessen's chance to sing.  Great up tempo track with each vocalist shining.  An infectious guitar riff made for toe tapping.

"Tongue Tied"  Their calling card.  It was delivered with such ferocity and maturity last night.  Impressive!

"Colours"  This video does not represent the band and their vision.  The song is incredible.  They can try to be dark, but we know the truth.

They have their first headlining tour upcoming.  GTS suggests you go get a taste:  http://www.grouplovemusic.com/  They may not want you to trust a happy song, but who cares?  You can still love the hell out of it!!! 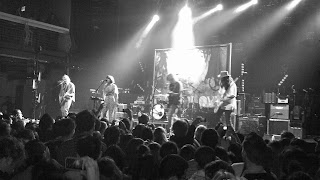 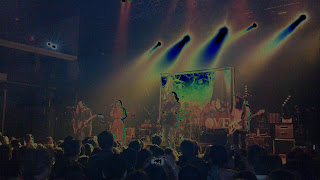 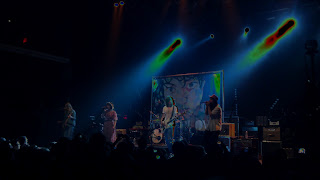 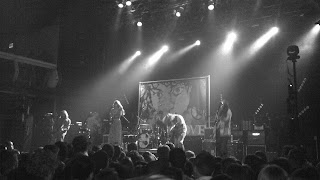 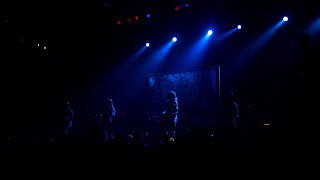 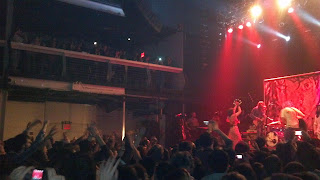 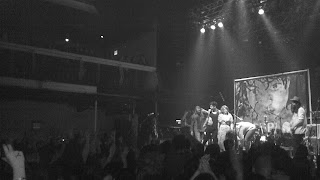 Oh, and Young the Giant headlined.  That's not fair.  The California band also has but one studio album (self titled,.)  They have had more commercial success, led by their (3) alt radio "hits", "My Body." "Apartment." and "Cough Syrup."  Led by vocalist/showman Sameer Gadhia they played what amounted to a slightly above average set.  But it did not fully engage the crowd, or this reviewer.

Their catalog is built of mostly soft guitar and/or slow moving frat rock hits.  And that's not necessarily a bad thing.  But Terminal 5, as mentioned in this space before, is not the most forgiving room.  In fact, it is a rather cavernous sound killer.  A friend mentioned "It is where good bands come to sound like SH&%."

When the crowd senses another slow number they soon lose interest.  When the song sounds real similar to the one prior things can get a touch boring.

They would pick up things a bit from time to time, but then the infamous distortion created by Terminal 5's ill conceived speaker set up would bite back a bit.  The songs were well crafted and pleasant.  But you should not be overhearing conversations at a rock show.  And you should definitely not be engaging in them.

Perhaps a smaller venue would better suit this talented group?  Perhaps a place with seats?  Gadhia implored the cliche "Hello New York!" and "Let's Rock" throughout the show.  But it felt forced when he would then launch into another moody vibe piece.   There was a string quartet and other horns sprinkled in here and there.  They were barely audible.  And Gadhia used 2 mics throughout the set and each sounded identical.  It gave him the look of someone trying real hard.  Effort should be rewarded.  But we are not handing out participation trophies.

Don't be surprised if last nights playing order isn't reversed in the near future.  And remember who told you first.

More on Young the Giant:  http://www.youngthegiant.com/

"My Body"  The encore and highlight of the show.  All things being equal Gadhia has a tremendous voice and this song is a rollicking good time.  The only time during their set the entire crowd was engaged.

"Apartment"   Here is a live version which might play more to their strengths. 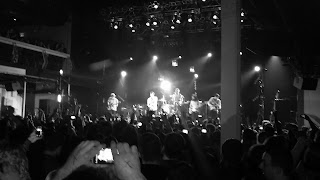 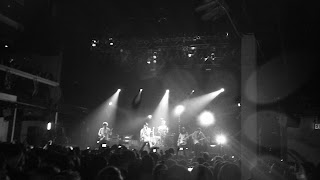 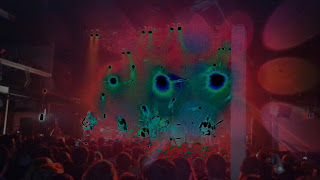 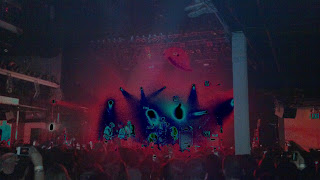 Other Essential Notes from the evening:

Reason to hate Terminal 5 number 6032:  The parking violation trap set up on concert night.  As you leave the West Side Highway driving north the venue is easily accessible on the 56/57th St off ramp.  As you enter 57th St there is a one way with I am told a stop sign.  A large NYC Sanitation building is to your East as every car slides through it merging onto 57th St headed East.   Last night when you made that turn two cops were in the middle of the street pulling folks over for running the stop sign.  The stop sign that they cannot see since the building obscures the sign/and stop area before the turn.  NO ONE stops there!!  Some folks get tickets.  The free street parking found moments later pales in comparison to this: 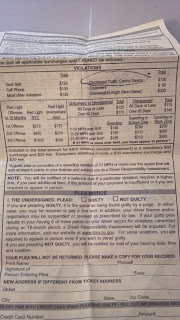 $130!!!  Check back here for updates because they just messed with the wrong person.  Don't think I have time to appeal this?  Write letters?  Think again.  My 9 year old will be driving by the time this is resolved.

And what is up with the security last night?   The TSA lets folks board international flights with less resistance.  And no this is not because they came at me hard and I had to throw something away to avoid jail time.  Although that might be part of it.  This profiling thing has got to stop!!!  Hipsters are people too.  Apparently Terminal 5 is their temple.

Both bands bassist had what amounted to a bassist uniform.  Big beard.  Big hat.  vests.  It was both odd and comforting.  The bassists are so important for mood setting.

Being drunk and singing along is a good thing.  Being drunk and singing along to a totally different tune/melody/you name it, and loudly, is not so good.  Remember, sometimes a band is going to attempt something different from what you hear on your radio.  Live shows are made of improv.  It keeps the artist from going crazy and gives you some added depth to a song you already adore.  Let the song breathe before you go giving your two cents.  We did, afterall, pay for the band, not you.

Gentlemen, we can give you a pass for getting sick and not having full control of your bowels.  But on your worst day you should be able to secure 95% of stomach contents in the toilet.   If you are unable to handle that task please refrain from heading out.  Leave your big boy pants off and leave it to the professionals.  You know, the ones who get tickets and are nearly arrested.

Next Stop:  Gomez at Bowery next Sunday!!!