A Weekend in NYC, Part 2, War Horse at Lincoln Center 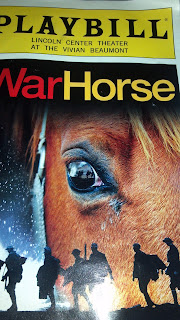 What do you say about a play that has been at Lincoln Center for nearly a year?  A play that had critical acclaim from London's West End for years prior to its export to this fair land?

Are there superlatives left unsaid to describe this production?  Everyone knows it was a childrens book by Michael Morpurgo (circa 1982) before the play right?  It is common knowledge that Spielberg's Academy Award nominated film is based on both the book and this play?  Right?

After a discussion with some friends on Sunday it became obvious not everyone knows this play exists.

The setting is Europe during the first World War.  A British family buys a young horse (they cannot afford it.)  The horse is not a farming horse in a time when a farming horse is needed.  Their young son (Albert) forms an unbreakable bond with the horse (training it as a thoroughbred.)

The father sells the horse to the British Army (breaking a promise he made to Albert.)  Albert joins the Army (at age 16) to find his beloved friend.

By no means is this an Earth shattering premise, nor does the narrative break any new ground.  Broadway plays, for the most part, follow this familiar pattern.

What separates War Horse from the ordinary is its magical and breathtaking production design.   More specifically, the Handspring Puppet Company's efforts bringing Joey (as well as other horses/birds/ducks) to life is reason alone to run to the Vivian Beaumont Theatre.  Not since John Cusack in Being John Malcovich has a puppeteer elevated the art.

From the moment the young foal, Joey, enters the stage you easily suspend disbelief and accept him as a real equine.  Each horse is handled by three humans and it is so effortless you can do nothing but drop your jaws.  And gasp.  Cry.  Smile.  And be forever changed.

If you have not seen how the horses are brought to life take a look here:  War Horse West End Trailer

This is far from a puppet show though.  Which is why the Lincoln Center run, expected to be a few months, has been extended to an infinite run.

The acting is exceptional.  Their are some traditional musical pieces, which act as an added narrative, that are performed/sung beautifully.  The lighting and sound (both Tony winners) are fantastic.

Right, the superlatives.  It is that good.

This space is usually reserved for avant garde music, childrens films, or other digressions on culture, politics, life in general.  In War Horse we are presented with most of that and more.  The human condition fully examined.

What is important to us all?  What will we do when crisis arises in our everyday life?  Can we take someone on his/her word alone?  Are we ever able to trust someone?  Can we love unconditionally?

This is the power of art.  Those questions, some answered, most not, are all presented over the plays 2 plus hours.  All the while we are transported into another World.  The imagination very much at work.

We all struggle in our day to day lives.  So too did those in World War 1.  We all try and put our best foot forward.  We all deserve a few hours to be reminded how far we have come.  Give yourself some time to avoid abortion debates, Iran/Israel talk, skyrocketing gas prices, homework, household chores, etc...

You will not be disappointed.


PS:
There are far more moments that deserve acclaim, but again, nearly a year after it opened it seems trivial.

The play won 5 Tony Awards and countless others from its stint in London.  It is also starting a travel run this summer and will also be staged in LA and Toronto soon.  Yeah, it will be around a while.