You would think a Friday evening show would be ideal for working folk.  Maybe not.

After fighting with clients, raising children and training puppies all week a Friday evening sinking into the couch watching Law and Order can be very inviting.

In any event Terminal 5 on Manhattan's Upper West Side was the site of NY's own Sleigh Bells' coming out/record release party.  OK, they are promoting their second album( Reign of Terror released 2.21)and appeared on Saturday Night Live this weekend too.  Coming out party is over stating it.  These guys have a following and packed the house Friday night.

Youth was served with a high energy, high octane dance/pop/club mix the kiddies ate up like so much Fun Dip.

Sleigh Bells is made up of Derek Edward Miller (guitar/production) and Alexis Krauss (vocals.)  They were joined by another guitarist and played in front of an enormous stack of Marshalls. 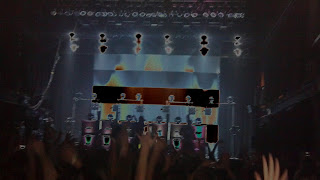 Keeping score?  2 guitars and a microphone.  Nothing else.

But a whole bunch of sound, or "noise pop" as it is classified.  Tons of percussion, with nary a drum to be found.  Synths and bass lines filled the air, from pedals and backstage, one must presume.

A medley of 4 to 5 minute tracks admirably performed and overall very entertaining.

Earth shattering and ground breaking rock and roll?  Um, no.  Having only formed 3 + years the group has a respectable setlist.  They play well as driving music and the soundtrack to household chores.  Ms Krauss' voice is strong, yet hardly unique.  Miller's value is clearly more in production than guitar work.   Together their live show is raucous, exhuberant, and overall somewhat lacking.

Take a look at their SNL performance from the other night as proof.  Over and over the refrain that seems most apt:  good, not great.  Why all the hate for Lana Del Rey on SNL and these folks get a pass?  Oh, right, they are not as glamorous so that means they are edgy.   Critics, and especially the Alt bloggers, hate a pretty face.  Better to sound average and look the part rather than look great and play average.  Or something like that.

The biggest disappointment of the evening occurred prior to Sleigh Bells taking stage.  Black Bananas, veteran indie girl Jennifer Herrema's latest vanity project, played a half hour set filled with more pretension than one of these blogs.

Overlapped synths, laser beam sounds, screeching/incoherent vocals, over and over again.  As my friend Phil H noted from the front row "They were trying way too hard to appear apathetic."

Bad sets happen.  Bad acts can (read:should) be avoided.  It would be nice to get a heads up about what the event really is before you arrive.  Truth in advertising please!!  Is that too much to ask?  Set the bands, give me times they will appear on stage, and end it!

Adding another act prior to the show is welcome and understood.  However, the unannounced/billed band MUST play first.  Don't get too literal either.  If Mick Jagger or Morrissey shows up they can do whatever the hell they want.

Black Bananas, without a record or, judging from the luke warm reception they received Friday, much of a following, had no business playing when and where they did.

They let the air out of the building.  They put Sleigh Bells at a distinct disadvantage.  Although Sleigh Bells would have had to defecate on stage or abuse children to offend more than did their supporting act.  In a way it helps the headliners having drek play before them.  Much like the overripe bananas that sit in your fruit bowl Black Bananas had no business sharing the venue with more polished acts.

The evening was not a total loss.  But it was far too close for comfort. 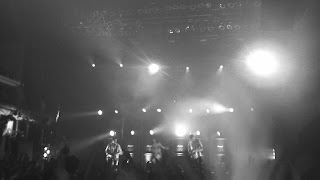 Bowery Presents streamed the entire show live and has some high quality clips on its website(http://www.youtube.com/user/bowerypresents/featured).  For a few of the highlights take a peek here.  Looks like this will be a trend so even if you cannot make a show there is a great way to see live music from home.  Also, should you want to take someone who is not a fan of the pit (children, lame friends, etc...) they can watch the feeds from the upstairs lounges and say they saw a great show.

Should you have a Hulu account you can see "Comeback Kid" from SNL:  Comeback Kid  Leather studded coat and white Keds.  Different, right?

Stay tuned for Part 2 later this week where War Horse (the play) is discussed.  Hint, it's pretty freaking awesome!!!