There are forces around me that suggest we are living in End Days.  There is a Nor'Easter headed our way this weekend.  Naturally, it is October.  Recent history predicts nasty weather this time of year.  In fact, my daughter has not gone trick or treating the past few Halloweens.  Two years ago we were hit with a colossal snow storm that crippled the area for several days.  Last year, a little thing called Super Storm Sandy, well, ya know.  Tomorrow we will take the little one to NYC for our annual fall visit.  That day usually begins with a stop in New York Costumes located in the West Village.  Dare we buy an overpriced costume for a Holiday that Mother Nature is determined to destroy?  Will it be locusts or frogs that take it out this year?

And that does not speak to the mess our political system finds itself in.  Never mind the ongoing shut down and looming debt ceiling crisis.  Even if we manage to claw our way back to "normalcy" the landscape still looks pretty shitty.

Let's not get me started on global health either.  Have you seen Contagion?  One bad virus and things can get real up in here.

Wait, that sounds like I am buying in.  And I am not.

There are way too many good things out there.  Have you seen the sunsets lately?  Autumn's colors are vibrant and life affirming.

It's fall movie season.  Tom Hanks once again portrays a heroic "everyman."  Gravity is busy blowing people's minds.  Not to mention Katniss Everdeen coming soon to a theatre near you.

The fall classic is days away too.  The Red Sox, love them or hate them, are competing for baseball's title.  The Pittsburgh Pirates, away from postseason baseball for two decades, just wrapped up a tremendous season in one of America's great stadiums, in one of America's finest cities.  They brought back feelings of Clemente, Stargell and Tekulve, and not so much Barry Bonds.

Oakland and Detroit, two cities with their share of problems, will vie for a trip to the ALCS tonight.  Win or go home.  All hands on deck.  Sport as metaphor.

Me?  I dig on music.  More specifically, I likes seeing it live.  It is on stage,  without the smooth trickery of an MIT trained producer, that an artist can really shine or crack.

Either way, it's a worthy endeavor.  Will the crowd buy in?  Will the performers surprise?  Engage?  Recoil?

How will the energy from headliner be?  From audience?

It is never the same.  Venue, band, crowd and any/all intangibles all add up to an unpredictable endeavor.  Why should art be any different?

At least it is honest.  That, in itself, is worth the effort.

There were about a dozen shows last night, including a special SiriusXM album release party by Cage, the Elephant, at The Studio at Webster Hall.  You can't see them all.  England post-punk rockers Palma Violets were in the Grand Ballroom.  And they had the floor rocking. They played to a modest group of cleaned up young folk.  It was a respectful and well behaved crew considering the band, duel frontmen Samuel Fryer (vocals/guitar) and Alexander "Chill" Jesson (vocals/bass) were heavy on guitar and not lacking in energy.  It has been the year of post-punk, at least in my world.  Savages, Parquet Courts, and Wire are some other bands this space has covered within the past few months.  Everything is cyclical in music.  80s synths are back big- Holy Ghost, The Naked and The Famous are just a few acts playing to sold out NYC crowds in the coming weeks.  90s grunge is gaining steam too... Diiv comes to mind.   The innovators and forward thinkers are harder and harder to find.

That does not mean the music scene is dormant and uninspired.  Palma Violets are accomplished rookies in the unrelenting world of rock.  They have one record, 180, which was released in February.  Formed a mere 2 years ago, Palma Violets has earned its stripes touring the World.  Last night's show marked their biggest NYC event and they were game to please.  A couple of chords, blissfully ignorant and boyish lyrics/vocals and a whole lot of attitude.  An ancient formula started long ago that hasn't aged a bit.  Good stuff, especially their break-out single "Best of Friends".  Not only did they make that single soar, they played it mid-set, not as their encore.  The enthusiasm, both with artist and audience, often peaks mid show.  Why not capture that energy and kill your signature song?  They did, in a big way! 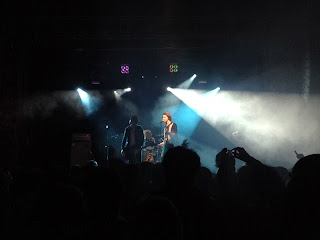 Those familiar with this space should know that NY based Caveman are my personal favorite.  The final transcending moments of "Old Friends", from their debut record CoCo Beware, made me an instant devotee several years ago.  I am hooked.  I am a groupie.  I, like many who have seen them live and fallen in love with their songs (including this years self titled sophomore record) wants desperately for them to succeed.

They have been on the road most of the year supporting, and clearly crafting/perfecting, the new material.  My friends and I worried that the sophomore record was too soon in the making.  Not everyone heard and responded to CoCo Beware like they should have.  How can Toro Y Moi and Youth Lagoon make inroads and open arena shows and these guys not catch on?  The sound is so full, so rich, so beautiful.

It was with some reluctance I ventured uptown to the soulless monolith calledTerminal 5.  Last time I was there security gave me a hard time about something...  can't remember what.  Logistically it is difficult.  57th and 12th Ave??  That's Weehawken, NJ as far as I am concerned.

Then there is the issue with the sound.  It is NEVER right.  Did Caveman stand a chance against the vicious engineering that makes bigger bands crumble?

The answer was no.  Which is not to say Caveman were not, as they always are, incredible.  There were plenty of folks around me who were caught up in their dizzying and effective set.  Many were there for the headliners, Ra Ra Riot.  It is safe to say Caveman converted more than a few.

"My Time", (fast paced rock-a-billy) and "Thankful" (moody and introspective) were both goose bump inducing.

But it was Caveman's new work that stood out.  "Where's the Time?" is a groovy and elegant piece.  "In the City", something of a return to town anthem last night, paints an elegant picture of longing, regret and hope.

Like Palma Violets, Caveman are not out to rewrite the blue print.  Matt Iwanusa, singer/guitarist/drummer, is not your typical leading man.  He has a lot more swagger than when I first saw him few years ago.  But Mick Jagger he is not.  What he does have is a presence and the ability to engage the listener/viewer.  His voice is soft, yet powerful.  His demeanor, that of someone genuinely grateful to be doing what he loves to do, is apparent.

His cast mates, Jimmy "Cobra" Carbonetti (guitar), Jeff Berrall (bass), Stefan Marolachakis (drums) and Sam Hopkins (keyboards) are all equally "in the moment." There are no wasted movements or insincere gestures.  They were once again joined by Matt Clark, drummer for another NY band, White Rabbits.  He has become the de facto 6th member and when he has added a fuller sound(!) to an already formidable staff.  It is no nonsense jam, vibe, tribal, pop, rock.  Berrall adds smooth harmonies. Cobra's howling guitar fills are mesmerizing.  And Hopkins goes about the business of adding layers, and layers, and layers.

Were there misses last night?  Yes.  As I mentioned, this was Terminal 5.  Matt's microphone was turned up too high and dissonant on more than one occasion.  Jeff and Cobra were turned too low on the other hand.  The mix, as is often the case, was not ideal.

But the local kids were on the big stage, where they belong.  Next time maybe The Beacon or Hammerstein.  Someplace where the climate suits there clothes.

Terminal 5 once again proved itself the tundra to rock's Mediterranean sensibilities.  Fret not Caveman, you are still beloved and I was not the only one who walked away with praise and admiration last night.  That is the good news.  This place needs more Caveman fans. 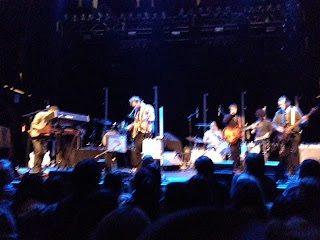 Parquet Courts at MHOW 10.2.13
The Parquet Courts show left me a little disappointed last week.  It could have been the 11pm start coupled with a 5am wake up call the next day.  Whatever the case, they were a fine post punk act who left me wanting more.  There were some fine moments, sure, but too often one song sounded eerily similar to the previous one.
Posted by HankB at 12:43 PM