"Cold Winter, brought to you by Hot Summer" was one of the many non-sequitors Sam France uttered at Tuesday nights packed concert at Brooklyn's MHOW.

France, and Jonathan Rado, are the duo behind Foxygen.  They are, quite simply, a jubilant and eccentric collection of personalities, talents, egos...  Well, that's just it.  They cannot be defined "simply."

"Partly truth/partly fiction...  a walking contradiction."  Those lyrics, written long ago by Kris Kristofferson, seem to capture the essence that is Foxygen.

Are they the band that flaked out and cut several shows short at last years SXSW?

Or are they the ambititious go-getters who announce not 1, but 3 forthcoming albums?

They have had a Yoko Ono moment over the past few months.

France broke his leg jumping off a monitor earlier this year forcing the cancellation of their fall tour.

That was then.  They may have saved their best, for last in 2013.  It centered around 2 nights in New York City.  Late October nights too: which meant a Halloween theme.  Rado took the stage first, in a mad scientist outfit (with the name "Dr Love" on his lapel.)  His high hair and pale complexion made the outfit quite convincing.  He played with some knobs and set the mood for whatever the hell was coming next.  A zombie janitor on guitar...  a mummy behind the drum kit...  and France, the master of ceremonies, was a spot on Beetlejuice.  "It's Showtime" he dead panned.

Indeed it was.  This will most likely put a bow on shows promoting their trippy, groovy and aptly titled We are the 21st Century Ambassadors of Peace and Magic.  With all the controversy, in-fighting and overall drama it might be best for these chaps to get back in the studio and see if they can make continue to make things work.

Because when things are working- like Tuesday night- things are pretty freaking cool.

The boys are clearly inspired by the 60s mod movement.   "On Blue Mountain", with its bold organ, screeching vocals and laid back bass line, traces its roots to The Stones circa 1968.   France's theatrics, here helped with an electronic walking cane, are also a nod to Mick Jagger.  He was limited due to lingering effects from his leg injury, but he gamely roamed the stage.  He likes the eyes on him.  Tuesday he was overly thankful for those in attendance and any sort of rock star attitude was replaced with sincerity and a fun loving vibe.

Peace, magic and some funky rock and roll.  Theatre, goofiness and playful irreverence.

Two of the finer moments were mid set.  First, the bands live interpretation of "Shuggie" was a stand out.  Their first single, released way back in January, allowed the band to show off a bit.  France and Rado changed the momentum of the song in all the right spots.  From one moment it was gospel sing-a-long.  The next, guitar happy jam fest.  It was hard to contain a smile and the crowd ate it up.

"No Destruction" was important for other reasons.  Mainly, the lyric "You don't have to be an as*hole anymore/You're not in Brooklyn anymore" appears in it.   Also, the song is a timeless gem.  1965 meets 2013.  Naturally the crowd (mostly non-Brooklyn as*holes) loved the shout out.  And let's be honest, Brooklyn, although awesome, can be kinda pretentious.  Foxygen knows that.  They are too!  If you can't laugh at yourself, who can you laugh at?

For a night Foxygen will be remembered for all the right things.  They may be wondering if they can do every gig in costume.  Maybe they can be a cross between GWAR and The New York Dolls?

Who knows if that will happen?  Or if they will indeed head to the studio to make 3 more records.  Hell, if they break up tomorrow no one will be surprised.

Like a great many bands working today the future is tenuous, at best.

Why should they be any different? 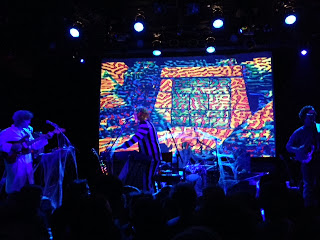