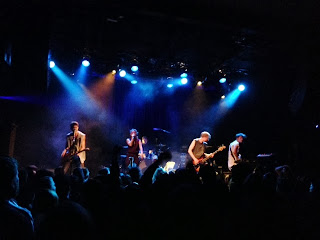 My wife and I have been discussing the inevitable Arcade Fire tour.  It's coming.  And I want to see it!  They are performing this weekend as their altar ego's The Reflektors.  On one hand these cats from Montreal might be the most important band working today.  After the commercial and critical success of The Suburbs, there is high anticipation, and expectation for the new material.  And when they do hit the road they will more than likely sell out arenas around the globe.  Expect the entire arena to be packed too, not just the lower bill.  Nine Inch Nails and The Killers are the mast few acts that passed through the mammoth Prudential Center.  Tarps covered much of the venue.

They demand a big stage.  After all, there are like 30 band members.

Arcade Fire are willing to bring theatre and performance art too.  Their Roman Coppola directed short, "Here Comes the Night Time", is the freshest and most innovative music promotion in recent memory.  A network tv special/concert film?  Smart.  And effective!  Oh, and the new songs are pretty friggin good.

I know what you are thinking?  Am I supposed to be reading a recap of the Swedish pop band The Sounds?

Well, yeah.  But it goes back to what my wife and I discuss.  She will not entertain seeing Arcade Fire because they don't "look" like rock and roll.  That's the second hand if you are scoring at home.  That isn't to say they are ugly- or maybe it is.  I am not saying that!  Someone I know is :-)

Let's be honest.  The look of a show is super important.  Which is why, Monday night in Brooklyn, things took an unfortunate turn.

Maja Ivarsson, lead singer for The Sounds, was not in top form.  In November, 2011 I was highly entertained as she dominated a packed Webster Hall with her high energy and good grooves.  It did not hurt that Ivarsson was heavy on bravado (chain smoking/short skirt wearing/supremely confident.)  She had the moves and swagger like a 70s punk goddess- somewhere between Blondie and Joan Jett, with a dash of Abba.   I was a little smitten.

The last record was pretty special too.  And the NYC show was on the tail end of a long, long tour.

Monday Ivarsson looked several years older than her age, 34.  Making the new record... or the cigarettes... or simply the everyday toll of life as a musician...  have caught up to her.  She was quick to mention the band was celebrating "15 years as an fu**ing band."  Impressive.  From age 19 she and her mates have been living the dream.    The short skirt was replaced with an odd jump suit and her hair was poorly kept.  She looked very different indeed.

For a Monday night show the crowd was 1) large and 2) ready to rock.  We arrived right before they hit the stage and there was a buzz.  They opened with "No One Sleeps When I'm Awake" and everything seemed promising.  She sounded better than average and that song choice was fun.  If anything, they were mic'd too loud and not all on the same page.  No sweat, it was the first song, first set of shows, etc.  They were shaking off the rust.

A few songs later when Ivarsson totally forgot several verses and the band abruptly ended "Something to Die For", their most successful track from their last record, it all went downhill.

I couldn't fully engage with the new material, which has some winners.  Notably, the first single, "Shake, Shake, Shake" and "The Weekend" are both groovy tunes.

It was the dropped verse that sent my ears packing.  Then my eyes started to wonder.  Is Ivarsson ill?  Is she getting along with these guys?  15 years is a long time to be together?  Can you name 10 other bands who play today with their original lineup that long?  It is not many, trust me.

They weren't looking at each other on stage.  The chemistry was messy.

At least that is what I saw...  and I was not alone.  My posse felt the same way- and there were four of them.

Even a drunk or two that poured out were heard muttering "Too bad about The Sounds tonight.  They sucked."

Maybe not that bad.  And you can't trust every drunken hipster you hear.

Something was missing though.  I understand it is shallow and superficial to want to see a band for its leading lady.    Madonna did not get to where she is because of her voice.  Adele she is not.

Looks are part of the show.  When you fail to remember your own lyrics and struggle through a set you should be expect to be judged harshly.  It happens.  Try harder to make sure it does not happen again.  And I will try not to be such an ugly American.

The truth is a nasty thing.

The Sounds forget their song "Something to Die For"

Email ThisBlogThis!Share to TwitterShare to FacebookShare to Pinterest
Labels: Maja Ivarsson forgets words, MHOW 10.14.13, Shake Shake Shake, Something To Die For, The Sounds, The Weekend