Last week the country became obsessed once again with Tara Reid and Ian Ziering, thanks to the unholy spectacle that is Sharknado.  It was a welcome diversion to the wasteland that is summer television and the disastrous summer movie season.  Big budget "blockbusters" (see Pacific Rim, Lone Ranger and After Earth) have lost millions of dollars at the box office.  And with the exception of weekend cable staples, Dexter, True Blood, and FINALLY The Newsroom, summer is easily forgotten on the tv dial.   These are the dog days in the sporting world too.  The ESPY's?  Really?

It was with that knowledge my wife and I took a dare from an old friend and bought tickets for Tuesday's show at Bowery Ballroom.  "Sure, why not?"  we thought.  Literally nothing better to do.  It also gave us an opportunity to eat at Supper in the Lower East Side.  Try the bolognese!

What did we know about venerable Brit punk/new wave act The Wire.  Nothing.  What of their opening act, Brooklyn's Bear in Heaven?  Still nothing.   Maybe even nothing-er.

We may not have known the bands prior to Tuesday.  But we do now.

Let's set the record straight.  First, both acts had far too many quiet moments during their sets.  Bear In Heaven, who have been around for about a decade, suffered a bit from song sequence selection and had too many slow moments  The trio incorporates synths and tribal beats to create, what some call "space rock."  Their single, "Sinful Nature", from last year's LP I Love You, It's Cool, has flashes of the 80s Manchester sound with a side of Jan Hammer.  They rely a bit too heavy on the pre-programmed computer for my tastes, at least in terms of their live performance.  Singer/keyboardist/founder and frontman Jon Philpot has enough charisma and vocal chops to get your attention.  Drummer Jason Nazary and bassist Adam Wills are solid, if not spectacular compliments.   The styling of the group needs some work, especially if they are going to make a living with a slower paced show.  If there are down moments you cannot help look at Wills and his oddball hat and creepy mustache.  My better half had two of the best lines of the evening.  First, Bear in Heaven might be her favorite "Bear" band.  Apologies Grizzly Bear, Panda Bear, Bear Hands etc...  No apologies to Barenaked Ladies.  You suck.  She was particularly happy she could share that thought with Nazary on Houston St after the show.

Second,  "Wills might be the most unattractive bassist she had ever seen."  Ouch.  It need not be that bad.  Wear the hat like an adult, not child of the 1950s.  And please note, only John Waters can wear a mustache that thin.   Sadly, although Nazary is talented and super friendly, his look (a cross between Woody Allen and Patrick Carney of the Black Keys), does not scream rock star.

Also, "The Reflection of You" is a nice example of easy going pop that might make you think of New Order or Joy Division.

At first glance the youngsters, Bear in Heaven, seem an odd choice to open for vet rockers The Wire.  After all, Wire became a band in 1976 or so.  The members of Bear in Heaven were all BORN in the 1980s.  Differences aside,  these two bands complimented one another surprisingly well.  Long regarded as an important and influential act (very much news to me) The Wire delivered an entertaining, if not awe inspiring set.  Singer/guitarist Colin Newman, bassist/vocalist Graham Lewis and drummer Robert Gotobed are the original members and have more than stood the test of time.  Newman rocks the Joe Jackson/Elvis Costello look.  For a great deal of the show he looked at a mounted iPad between every note/lyric.  This is a bad, bad thing and let me tell you why.

Even if he was not using it for lyrics (it was probably used for the mix and sound- in addition to words), it is, without question, anti rock and roll.  And, since The Wire are noted as forerunners or creators of the post-punk revolution, it can be said with much certainty that an iPad is ANTI punk.  Newman would have been better suited mounting the Ipad in front of his microphone, rather than off to his right. He never made eye contact with his audience and, for much of the evening, had the look of a Jr school talent show instead of the legend many think he is.  His biggest sin however was singing each sung with the same tone and inflection.  If you are not going to look at the crowd your voice had better represent.  Sadly, it did not.

Lewis and Gotobed on the other hand carried the evening with booming bass lines and rapid drum lines.  Clearly they have been doing it for a while.   Gotobed has the arms of a young Gilad and Lewis is a cockney version of Lawrence Tierney circa Reservoir Dogs.  "What do you mean you don't tip??"

Looks aside The Wire's hour and half set was well worth a blind taste test.   Was it an Earth shattering event that has converted me into their biggest fan?  No, clearly my buddy that brought me here has that title wrapped up.  But it sure beat the hell out of Hell's Kitchen or Wipeout, or whatever happy horsesh*t might have been playing that night.

Yeah I suppose I could read once in a while.  But who has time for that??  Except you of course.  Thank you sincerely! 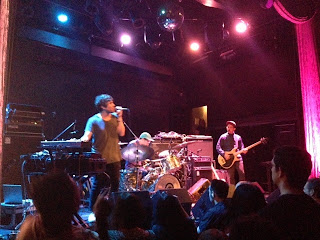 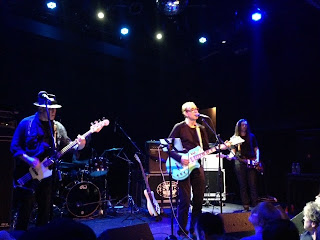 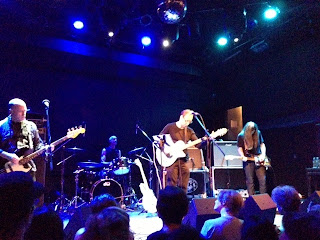