There were plenty of moments prior to last night's sold out Savages show at Webster Hall that made me wonder if the hype and/or buzz was going to lessen the event/experience itself.  The post punk English girl rockers (singer Jehnny Beth, guitarist Gemma Thompson, bassist Ayse Hassan and drummer Fay Milton) has erupted onto the alt rock scene following the release of their debut, Silence Yourself.  They have been touring non stop and both selling out each gig and gaining a reputation as a venerable live act.  They have already booked Terminal 5 later in the fall and will likely sell that massive house out too.  When I got behind Rolling Stones music critic David Fricke in line yesterday I was even more skeptical.  So I asked him, "Have you seen these ladies yet?"

"Oh yes, several times" he quickly answered.  "In London, and other places."

"Are they really that good?" I wondered.  "I would trust your judgment."

A simple one word review that pretty much sums up the machine that is Savages.  Poised.  Talented.   Well. Worth. Your Time!

Beth (real name: Camille Berthomier) is a fierce and volatile presence on stage.  She prowls and pumps her fists like Billy Idol.  She looks a bit like Lori Petty (Circa Point Break)but sings a lot like a Patti Smith.   She is a bona fide rock star and commanded every bit of Webster Hall's historic stage.   She is a manic pixie in the best kind of way!

After they opened with the powerful "Shut Up" and boldly announced their presence with authority Beth glanced over at the engineer.  For a few moments she gestured with her thumbs way up and pointed to the bass.  Really?  More bass?

Hassan's instrument was already jacked up.  Dare we have more?  Soon the floors at Webster Hall were moving and chests were being pounded with fierce bass lines.  Power chords played all night and Beth's vocals played along nicely.  She was tough when needed yet able to hit the high notes accordingly when called for.

The highlight of the evening, the potty mouthed "Fu*kers", showcased the bands advanced skills.  Note, these ladies formed the band 2 years ago and are all in their early 20s.  They do not lack confidence and have more balls than many more established acts.  The song does not appear on their record.  If it did it would probably never sound like it did last night anyway.  It is roughly eight minutes of female empowerment played with youthful machismo.  Beth, who kept the between songs banter to a bare minimum, simply announced it's title.  "Don't let those fuc*kers get you down" she roared as her bandmates pushed full throttle.  The epic jam that ended the song brought down the house and converted all non believers.  Truth be told by that point the crowd was in their beyond component hands.  It should be noted for an up tempo punk show the audience was very well behaved.  They took the hard charging tracks with a reverence not usually associated with this type of show.

Alas, the rumors are true.  These girls rock!  You could go the simplistic route and make fun, but ultimately unnecessary comparisons.  Are they an all chik Joy Division?  Or perhaps Sinead O Connor meets Smashing Pumpkins?  New Order with a dash of Bauhaus?

Leave that nonsense for David Fricke and his peers.

Before we ended up at the show we had a few beers.  Don't judge!  We are all adults here.  We got to talking about how much we tend to "over-analyze" a show.  We often expect too much and are often times let down as a result of unrealistic expectations.  Sometimes you have to put the note pad down and listen/watch.

Last night Savages provided perfect execution for that well thought out plan.  As guitarist Gemma Thompson said earlier this year about the critical acclaim they have gotten:  "It's music to break sh"t and fu*k on the floor too."  Who doesn't like that?  And these days who doesn't need it??? 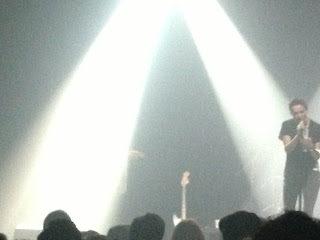 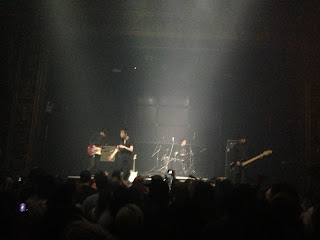 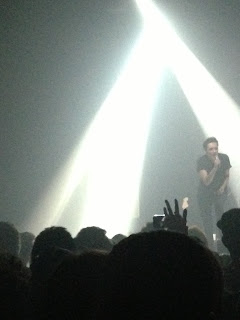