After a month long hibernation (partly due to recharging batteries/party due to profound and sustained family wide illness) the Suburbanite headed back to the concert scene over the weekend.  Wait, that is super douchey.  Referring to yourself in the third person??  Who do you think you are?  Kanye?

The intimate Music Hall of Williamsburg presented Cincinnati's Walk the Moon as their coming out party continues.  They also played a few sold out nights at Bowery this weekend, in addition to a music fest in Philadelphia for good measure.  This, following an endless promotional tour supporting their self titled debut LP, as well as the recently released EP Tightrope.  It is how you make it in the business these days folks.  Write. Record. Tour.  Sell what you can in merchandise.  Place a song in a tv ad:  HP ad featuring Walk the Moon's "Tightrope".  Write.  Record.  Tour some more.  Catch lighting in a bottle with a breakout song and video:  "Anna Sun"  Tour.  Tour.  Tour.

The quartet is led by singer/keyboardist Nicholas Petricca.  It is his voice and stage presence that steer the ship.  The remaining parts (Kevin Ray: bass, Sean Waugaman: drums, and Eli Maiman: guitar) all fill in the gaps quite admirably.  What they do best is create a near flawless four part harmony.  Those harmonies are best displayed in their stand out live track:  "Next In Line."  The chorus is juvenile and goofy.  But when those four voices pound them out it is pure euphoria.  "Why don't you stay shotgun til the day I die?"  Ah young love.  When sitting next to one another hand in hand is the most special time you can have.  The simple pleasures that make all the difference.  The driving beat and joyous energy from this song alone is reason enough to catch Walk the Moon live.  Please note, the time for seeing them in such a small venue is just about over too.  Once this tour finally ends another LP will hit the inter-web shortly thereafter.  A sell out show at a much bigger spot is theirs for the taking.

A friend of mine, from a life long forgotten, joined us for the show Friday night.  Shortly after they killed "Next in Line" he leaned over to me and said "Sometimes I regret growing up with 90s music."  Grunge music, while often times brilliant and important, was not the material you can dance to.  Kurt Cobain, Chris Cornell, and their brethren, were busy taking stands and getting angry.  Their music was a reflection of this dissonance.  Walk the Moon, and several bands like them with an ear (and eye) for the 80s, seem to be embracing that.  Petricca and his band mates don girlish tank tops and leopard print pants.  They smile and prance the stage making this Billy Squier video look like Megadeth.  And it's all good.

Smiling and dancing are pretty good things these days.  Being able to laugh at yourself and others are lost arts we all should embrace.  Good.  Clean.  Fun.  The perfect way to start the 2012 concert season.

SoCal band Pacific Air opened the evening with a short set heavy on synths and powered by the above average vocals.  Ryan and Taylor Lahorn are the main ingredients.  They released their debut record late last year.  Check out "Float" to dig on their vibe.  For fans of Passion Pit, Walk the Moon, Ra Ra Riot. 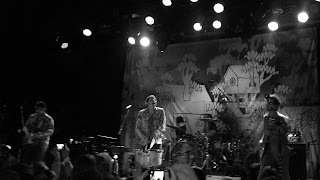 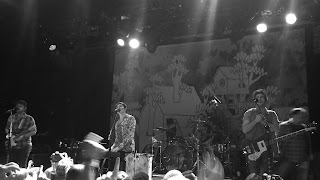 Walk the Moon 6.19.12 Mercury Lounge  review of show from last year that was not nearly as smooth or accomplished.  The ceiling is indeed high for these guys.
Posted by HankB at 11:16 PM