Last year around this time Foster the People were just about to blow up thanks to their breakout song "Pumped Up Kicks."  This summer might very well be the coming out party for Ohio synth/pop act Walk the Moon thanks in large part to their catchy, addictive single "Anna Sun."

Their record release gig Tuesday, 6.19 at Mercury Lounge showcased their confidence and ability.  It also had its share of misfires.  A 20 plus minute delay to start the show due to technical problems was the first obstacle.  Frontman Nicholas Petricca kept things jovial as the time passed on.   But he, and more obviously drummer Sean Waugaman were agitated.  Was there not a sound check?  On the night of your first big NYC headlining show shouldn't this issue have been resolved prior to the agreed upon 11pm set time? 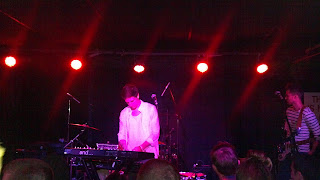 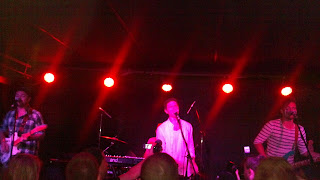 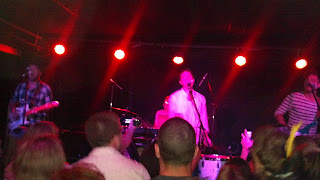 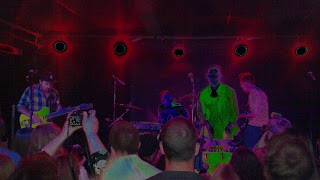 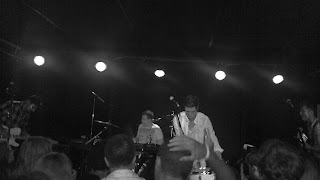 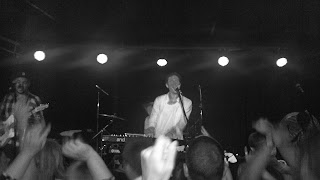 This may be nit picking...  but some of us aren't kids anymore.  An 11pm Tuesday night show for those who work (from out of state) the next day is a rather large commitment.

Once the dust settled the quartet played with vigor and enthusiasm promoting their self titled first full length LP.  The good news is they are not a one hit wonder.  "Quesadilla" is a fun little up tempo track.  Their second single, "Tightrope" has all the earmarks of an 80s John Hughes montage track...  echo...  synths...  popping drums.

Perhaps the best moment came from "Next in Line,"  a love song/plea rooted in Human League-isms both in lyrics and groove.  It includes the simple, but effective line "Why don't you stay shotgun til the day I die?"  The crowd and band played well off each other as each verse/chorus built momentum.  This track should be another big hit for the group and if not their management should be replaced.

This are bands doing this act a little better and with more polish.  The aforementioned Foster the People, Cut/Copy and M83 come to mind.

But for a group just starting out it is easy to see them playing bigger venues their next trip through Manhattan.  Petricca has a great voice and confident (maybe too confident) stage presence.  His band mates are ok, but can temper their theatrics a bit.  No one wants to see the bassist jumping around and knocking over the drum set.  They may have announced themselves as a rock outfit, but this is pop gentlemen...  leave the thrashing around to Axl Rose and the like.  And lose the scoop neck striped American Apparel shirts too.  That look does not speak to rock and roll (if that is indeed what you are going for.)

Perhaps the image issues, technical difficulties and higher than normal expectations led to our early dismissal?  Perhaps it was the late hour?  Whatever the case may be the grade is good, not epic.

Could very well the bar is set very high these days.  And that is a very good thing.  This country is too lenient on its young anyway.  No more participation trophies people!!  It is established that live music is one of the last ways to make a living for bands these days.  Commercial and TV work are right there too.

But as every band fights for listeners and the perfect venue the bar needs to be raised.  Bring your "A" game people!  We are keeping score.  There will be winners and losers!

Crowds, we are talking to you too.  If you want to talk to one another or make out with your girlfriend take it outside.  Some folks want to see the show on stage, not around it.   Getting fall down drunk is all fine and dandy...  just not on the floor of Webster Hall (or any hall for that matter!)

Let the Summer 2012 concert season begin!  Who are you looking forward to seeing???

Join the conversation and become a fan here:  Guide2Somewhere on Facebook


We happened upon Supper (http://www.supperrestaurant.com/) for dinner preshow the other night.  1.  TV chef Anne Burrell entered the joint right before us so we were sure the place was rock solid.  After all, if your business is food why would you bother going to a place that sucked.  2.  It far from sucked!!

This is the third restaurant from "the Frank Crew."  That is, Frank Prisinzano's attempt at grandma's Italian Sunday dinner.

With that I ordered simply, garlic bruschetta, spaghetti with tomato and basil gravy and the most succulent veal meatballs I ever consumed.  The Mrs had a pappardelle with peas and other assorted veg that she raved about.  No sharing!  I kept my elbows ON the table to protect this wonderful plate.

Cash only and an extensive wine list for those who are interested.  The kitchen is open and the tables are communal so the whole place feels like someone's home.  But, apologies to grandma, this meal made hers look like peasant food.  Next time you are in the East Village please take a bite.