Mind you, young Jennie Finch is not taking the mound in any of the 4 scheduled games.  There is some talent in the league for sure, but the league does not allow walks, coaches pitch after 4 balls, and high school kids umpire.   The NCAA Championships this is not.  Try telling that to some of the coaches in the league.  There are some that think they are the next Miller Huggins.

Here are some suggestions for the youth coach resume.

1.  Coach must have at least 1 High School Varsity letter.

2.  Let's make sure the coach has a clean criminal record.  * Mandatory!

1.  You are not allowed to criticize game calling or player management unless the coach is abusive.  If you find something wrong with the coaching style feel free to volunteer next season.

2.  If you sign your child up for a sport it is imperative they follow through on the commitment.  Make the practices and games as scheduled.  If you cannot simply let the coach know it will not happen.  Silence and/or no response is not only inconsiderate, it's also a little hostile.

But, I digress...  back to tonight.  This is a competition nonetheless.  And when another team is laced up to beat you should be expected to perform to the best of their ability.

It really does not matter what age you start competing either.  I was witness to a feisty 1st grade travel soccer game yesterday and the combatants were very skilled and hungry to win.  That is a good thing and must not be discouraged.

At the same time we, as coaches, have to be far better at understanding what is important and what isn't.

Helping kids improve with a positive attitude is acceptable.

Yelling and screaming at kids for "not" doing their best should be frowned upon.

Encouraging kids to come out of their comfort zone and try something?  Yes.

Sticking a kid in right field all year and ignoring them otherwise?  No.

Watching both 1st grade boys and 4th grade girls yesterday I was struck with one thing more than any other.  Coaches from a few teams were thugs!  And these were two very good games!  Sad I am reminded more of the overweight coach who verbally abused his group of 1st grade boys: "Get back to bench!  Hustle!!  C'mon James!!  You can't let that happen!!"

And there another coach who read the riot act to the referee.  Brutal.  Coaches coach.  Refs ref.  Players  play.  We send the wrong message when we interfere with that flow.

These were travel games, but again, what is really at stake here?  The goal is to keep kids active and healthy.  They should be learning how to play with one another.  They should be guided by sportsmanship and appreciating and respecting their opponents.

If it is not learned from the top, when will they ever learn?

The best example might have been a 7/8 grade championship softball game we tried to watch last night.  Our town was pitted against our hated neighboring town.  The skies opened up at game time and things the game had a delay.  The field is turf so when things cleared it all looked good for a 7:15 start.  The host town was reluctant to start.  "The pitcher cannot get a good grip on the ball.  The lights don't come on Sunday evenings.  etc..."

Did I leave out the part where they were hoping for a forfeit when our town was not there during the storm?  "They aren't here!  It's a forfeit!"  Duh, why wait at the field attracting lightning when they can go to their house for a half hour??

After some deliberating the coaches said they would not play.  They pushed for another day.

Did they go home after that?  Of course not, they started a practice.   What message does that send?  We would rather practice than play a game with you.  Never mind parents and team were now expected to come back another day.  A jerk move if there ever was one.

The same town, in a different league, asked to move a championship game to their field at a certain time over the past weekend.

Problem is they were not in the championship game yet.  You guessed it, they lost before appearing in it.

Have we all lost our freaking minds?

Let the kids play.  Do your best to facilitate and encourage participation.  There will be plenty of time for trophies and glory in high school and other competitive leagues throughout a child's life.

Is it impossible to NOT live vicariously through your child?

Now if you will excuse me I have to pump my daughter up with steroids and come up with ways to take out the opposing teams star hitter. 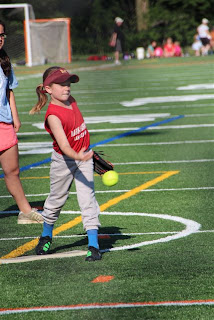