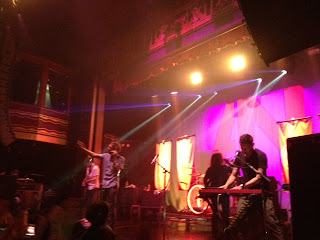 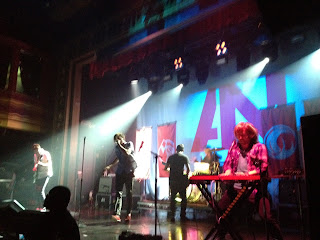 Was it the relentless touring the band has been on since early last year?  The soft, and rather mellow crowd that failed to fill the venue?  Bruno's reluctance to sing every note (rather allowing the crowd to help out whenever they could?)

All of the above?

It's possible.  But that is not to say the one hour set is unworthy of your attention.  Bruno, on his worst day, is still a formidable leading man.  Think, a somewhat muted and shirted Iggy Pop with a hint of pop star thrown in.

As the band played its encore Bruno commented on how his band refuses to play to a label, or classification.  "We play all kinds of music."

It's true.  And the setlist is full of strong and diverse numbers.  "Not Your Fault" is an edgy, anti-love song that mixes humor and angst.  It's sweeping synths flow nicely with Bruno's grunt and howl.  The ballad "All I Need" is rooted in southern Gospel.  Last night it was a highlight.  As was the trippy and electric bass explosion called "Kill Your Heroes."  It was the biggest sound of the night and most rewarding.

The problem is that track, "People," "Guilty Filthy Soul," and "Jump on My Shoulders" were all played during the first half.  Other than mixing up the setlist this show had all the same elements of November, with less, as the French might say, "I don't know what."

A very good time indeed.  But perhaps new content and some time off might benefit this likeable, talented, and very promising band.

AWOL Nation "All I Need"

NYC band Bear Hands (http://www.bearhandsband.com/) opened up last night and they have a little something going for them too.  Aside from being another in a long line of bands with the word "Bear" in it, Bear in Heaven, Panda Bear, etc...  they also happen to have an 80s synth inspired content with a lead singer channelling his inner Robert Smith.   Unsure if he was putting on an affect on his voice or if that was the authentic live voice.  From track to live act the two sounds are quite different.

Their set was tight save for some slower songs that require a bolder stage presence to pull off.  All and all an agreeable band that would fill in quite nicely on your new downloads list.  Take a look/listen to "High Society" which is streaming on their website.  Their new album is forthcoming. 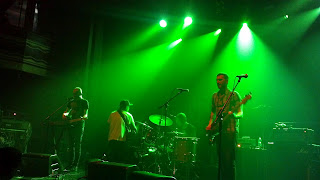 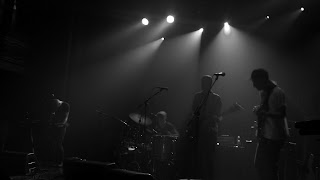