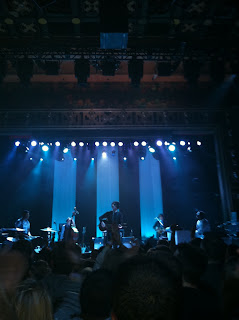 DEAR AMEX/WEBSTER HALL/JACK WHITE/GARY OLDMAN...  the above photo was not taking by me...  found it on the interweb.  I understand you had strict no photo rule and as difficult as it was I managed to contain myself.


Sometimes it is best to let things breathe.  Like when someone fails to alternate merge when they know full well that is what is expected.  You could blow the horn and flip a bird.  But that has not changed the outcome, has it?  Take solace knowing that person is most likely unloved and otherwise an enormous a-hole.  No biggie.  Breathe. Smile.  Move on.

It can be challenging to take that approach both on the highway, and with everything in life for that matter.  If a movie fails to engage you after the initial screening that FIRST response often defines the experience.  If a waiter or meal fails to win you over more than likely the restaurants reputation is forever sullied (in your mind.)

Maybe it's unfair.  Maybe unjust.  Everyone is entitled to an off night or misfire.

The same can be said regarding the opposite reaction.  For example, a movie you have longed to see might strike you as amazing even though critics and audiences all admonish it.  You might remember a concert or meal as transcendent.  Meanwhile, in reality the event was enhanced by alcohol, or the communal experience with close friends, a spouse, or family.

First impressions, we are all guilty of applying them.

Which is why, in addition to a weekend and work schedule that have been unrelenting, this review has been slow to see the light.

The answer is yes and no.

Jack White, out celebrating his first(!) solo album Blunderbuss, performed to a sold out, polite, and adoring crowd last Friday.  First, it's hard to imagine this is White's first solo album.  He has been making music consistently since the late 90s, with stints in The White Stripes, Raconteurs, The Dead Weather in addition to collaborations with Danger Mouse and Alicia Keys (to name a few.)

White is a diverse and accomplished musician.  He is honky-tonk and country. He is rock and he is roll.  He is both showman and understated bluesman.   Days have now passed and the prevailing thought is Jack White is an authentic music treasure.

The small show, part of an American Express' "Unstaged" concert series that pairs musicians with directors/actors, highlighted White's diversity.  Most of the event can be seen here:  Jack White at Webster Hall . British actor Gary Oldman did the filming and the always wonderful Webster Hall was home to about a dozen HD cameras.

His opening track, "Dead Leaves and The Dirty Ground," set the tone for the evening.  His driving guitar and howling voice announcing this will be a ROCK show.  He played two sets, the first with an all female band (The Peacocks), leaning more on steel pedal and showcasing terrific back-up singing.  The male band (Los Buzzardos), brought a similar energy to the second set.  They seemed more reliant on White for its direction.  It is a small complaint, if one at all.  The larger complaint might be his/their rendition of "We Are Going to Be Friends" fell a little flat.  Again, proceed with giving them a pass on one track.  They can't all be home runs.

But both bands are beyond competent.  It might be as simple as chicks playing looks hotter and sexier.  Therefore it is overall better.  The women in attendance probably would differ, or maybe not.

Either way, White was comfortable borrowing from his extensive collection.  He even covered Hank Williams' "You Know That I Know."  He asked the audience if it NYC was able to handle country?  They were.

It is funny Eminem and Jack White both grew up In Detroit.  One is the epitome of it's hard edged urban reputation.  The other, reminds us how Detroit is very much the heartland.  White, has his roots in blues and country, but his stories are also based in that same urban (and sometimes suburban) landscape.

He is an one of America's finest working musicians.  Given extended time to reflect that sentence sounds appropriate.  Not an overstatement at all.

Rock and roll is very much alive and well.  And its caretaker is quite capable of carrying the torch.