There are few bands that define the nearly 20 year old relationship I have with my wife.  When we met she was very much into Widespread Panic, the Athens jam band.  I was still learning the rock canon before gradually moving into more left of center fare like eels.  Somewhere in the middle we met at Gomez, and ultimately, a shared fondness for Ben Folds Five.   The North Carolina band made their self titled debut in 1995 (the year we met.)  Their super successful follow up, Whatever and Ever Amen, was a staple in our house in the CD era.  We related to the angst of "Underground" and progression toward adulthood Folds warned of in "Brick" and "Jackson Cannery".    They were albums for us.  More importantly they were not angry and pessimistic.  I, for one, could not be bothered with Kurt Cobain and his reluctance to live.  That was a downer man and who needed it?

How will I make I living?  How will I get through my 20s?  And beyond?  Unlike Cobain, it appeared I had no talent either.  That's friggin grunge my friends.  Paycheck to paycheck living and flannel shirts cause they kept you warm, not cause they look cool.  Music better lift my spirits damn it!  Otherwise, a long drive in the garage might sound tempting.

Ben Folds Five was the up tempo piano rock the mental doctor ordered.  They were a kind of Joe Jackson for the 90s set.  They even shared Jackson's sarcasm and wit.  Robert Sledge plays a heavy bass and provides harmony.  Darren Jesse keeps the beat and does it like a professional.  Ben Folds steers the ship with lightning fast piano licks and ironic, funny and heartfelt lyrics.  It's our warm musical blanket in an ever freezing musical landscape.

Saturday night the boys were back in NJ and brought back many good feelings.  They are the middle act in The Last Summer on Earth tour between Guster and Barenaked Ladies.  It's a good spot for them, although you can make the argument they should headline.  The truth is Barenaked Ladies have sold more records, had more hits and are indeed the bigger band.  That did not stop us before leaving before they came on.  Ben Folds Five performed like headliners and left us all very satisfied.  Their set was filled with older gems like "Alice Childress", "Song for the Dumped" and the aforementioned "Brick."  That track brought tears to the eyes seated next to me.  It was good to a) hear it and then b) hear them perform it without any tricks or gimmicks.  It was played as it sounds on record.  Sometimes a faithful and true adaptation is the BEST interpretation.

The band wasn't all ballads.  Their latest single "Do It Anyway" was high on energy and had the decent crowd pumped.  "Army", their final song, was a boisterous and joyous ending to an efficient, solid and wonderfully nostalgic set.  The format of the show prevented Folds to extend his sometimes endless song prologues.  A digital clock stared him and his bandmates right in the face and they hit all their marks.  They took stage around 8:40 and left promptly at 9:30.  Gone was the happy horsesh*t that can often plague a veteran band.   Simply put, it was well performed song after well performed song.  "Good night, thanks for coming."

No guys, thank you.  For everything.

The night started, also right on time (7:25 to 8:15 isn) with Boston band Guster.  These guys have also been making quality music since they early 90s.  It's funny, I thought I had a grasp on their catalog, and more specifically, their style.  It is, so I thought, a mix of cool, laid back rock.  Their radio hits, soft sing-a-long "Do You Love Me?",  pop psych diddy "Satellite", and trippy stoner anthem "One Man Wrecking Machine" are all fun, but never really broke new ground.  Who knew they had so much more depth and a live act filled with tribal beats, blistering guitars, and epic harmonies?  Slide guitars shifted to acoustic back with a stop on bluegrass land as the night unfolded.  It was a welcome mixed back

Guster, with their rabid fan base, (including two adolescent boys who sang, danced and cherished every moment), left an indelible mark on the event.

It shows how much quality and volume is out there.  My friends and I, this blog, and everything else that espouses to know something...  it is all nonsense.

Guster has been playing and performing for decades and this was the first time I was able to see them.  They were so good it makes me question the validity of anything I do.  I should have known how good these guys are.  I should be screaming from the hills to get on the Guster bandwagon.

The beauty is that at any moment you can be surprised.  You can head to an event sight unseen and with a very open mind and come out a devoted fan.

It's like the coaching cliche every kid grows up hearing:  "You will miss 100% of the shots you don't take."

Thanks to Guster (Ryan Miller, Adam Gardner, Brian Roseworcel, and Luke Reynolds) this summer just got a lot more interesting.  Who else can I discover for the first time?  Are their other veteran bands that may have evaded me?  Of course.  What of some newer talent?  You bet.

Stay tuned to this blog for more discoveries.  And should you want me to take a chance on somebody we are all all ears.

Special Thanks to Rory C for the amazing seats and for contributing the beautiful photos below. 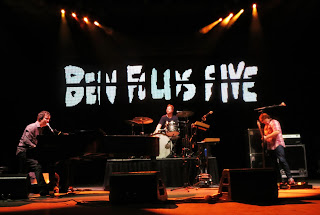