Since getting back into the live music scene (3-4 years ago) a few things have become crystal clear.  1)  Younger crowds are far more polite and well behaved than baby boomers and older hipsters (ya know, folks like me.)  Recently veteran Grateful Dead rocker Bob Weir reached his threshold and walked off stage due to incessant chatter in the crowd.   If you get a hippie worked up enough to walk off, well then, you really suck.  The Eels show at Webster Hall last week was also an older crowd.  And those folks would not shut up!  Listen, if you want to get your drink on, go for it.  Friday and Saturday night shows are the most dangerous.  Many of these people are out to "have a good time."  The music is secondary.  The fans of the artist really suffer due to what is fast becoming a majority.   In Williamsburg and the East Village there are probably about a thousand watering holes.  Must you get loaded at MY concert??

Last night in the intimate Music Hall of Williamsburg, British rockers Django Django played the second of their 2 night sold out stay.  They are supporting their eponymously titled debut album.  Two things:  First, the crowd was young, excited, and respectful.  Second, it was a Thursday night in Brooklyn.  Hence, those in attendance were all about the band and the music.  Those ingredients make for a nice foundation.   Note, it was adorable hearing some college kids comment how "cool it was they were seeing them live" and "that we should get matching outfits like the band."  Cute kids were giddy over their new idols.  When you get a group of people engaged from the beginning it serves as a huge boost.

We were urged to make this show by some friends of ours.  We knew the band.  Any fan of alt rock has heard their hit "Default."  They bought tickets and worst case we hang with good friends we rarely  spend time with.   Naturally they both cancelled.  We could have easily done the same.

So very glad we stuck to the plan.  We would have missed out on a fabulous dinner.  Those who love red meat, German beers, wine, ambience, great service and are in the Williamsburg area please, please go to St Anselm- NYT review here.  A better steak dinner this reviewer has not eaten in a long, long time.  The Mrs proudly exclaimed it was the best she had ever eaten.

We would have missed out on shoe shopping too.  Shoe Market on N 6th street is just blocks from Music Hall of Williamsburg.  Since the demise of Simple shoes it has been a struggle to find a suitable replacement.  Men don't shop for shoes do they?  College was the last time I can remember trying shoes on.  Lo and behold last night I did just that.  More shocking was two pairs were purchased!!  Good luck Camper  and Onitsuka Tiger!!  You LITERALLY have big shoes to fill.

The Mrs could not leave the store without some sort of red wedge.   Big step for her buying warm weather shoes in the middle of a snow storm.  Perhaps it was some sort of wishful thinking.  If these shoes are purchased warm weather will surely follow.  Silly girl.  When it is snowing in April this event  will surely be the reason why.

Our economic stimulus plan was well into action and then finally, the main event.  We were playing with house money now.  Steaks?  Check.  Shoes?  Check.  Songs??  Bring it.

Another lesson live music has taught recently is expect little from an artists "big" hit.  For example, Gotye's "Somebody That I Used to Know" was ok, at best.   Kimbra was even there to sing her part!  Walk the Moon's runaway smash "Anna Sun" was kind of a bore.  Last night, near the end of an otherwise fantastic set, "Default" was rushed, erratic and anti-climatic.  It is a "been there, done that" sort of thing.  Django Django (Vincent Neff-guitar/vocals, Jimmy Dixon-bass, David Maclean-drums, and Tommy Grace-synths) seemed slightly bored with it too.  They did their best to alter the beat and mix things up with it.  That was the problem.  The song has such a memorable hook and produced feel anything else seems contrived.  The whole damn song has been branded in my brain.  Play it as it is recorded and let the chips fall where they may.  If/when Django Django tours in 10 years they can play with this signature song and maybe joke about "how it started it all."

The good news is "Default" was towards the end.  By that time Django Django had won over the crowd.  This is NOT a synth act.  This is NOT a one hit wonder.  Led by Neff and Dixon's playful harmonies, penchant for odd ball instruments, and ear for melody, these guys can play.

Like their record, the show opened with "Introduction."  It serves as a kind of warm-up and set the tone wonderfully.  It has a simple bass line.  It has a tribal drum beat.  There are the requisite beeps and boops.  Then come the vocals.  They sweep you up a bit.  They put you in a trance.  They get you ready for the highlight.  "Hail Bop" is an absolute show stopper.  Ever have one of those moments when you cannot get a song out of your head?  Then you go see the band responsible and they go ahead and destroy it???  Yeah, that's me last night.  It helped that I was two rows back.  The light show was pretty darn special too.

But everything being equal the opening track should capture your attention.  "Intro/Hail Bop" is such a beginning.  Hell, we were already playing with house money, remember?  And then they go and bring this smile inducing reminder of all things groovy???  Well played Django, Django.  Unchained you are indeed!!

The rest of the set had a nice energy.  The boys had an aw-shucks way about them.  Their accents made it impossible to understand the limited chatter between songs.  But their eye contact and overall demeanor were unmistakable.  These kids loved performing to a crowd eager to hear/adore them.  While they are synth heavy, to say they are reliant on them is under stating things.  The live drum kit and strong bass liven things up.  Neff's guitar provides a distinct sound and is a not so subtle reminder that this is a rock band.  And you sir, are at a rock show.

On a lost, snowy Thursday evening we ventured out.  When the evening ended (back safely in NJ before midnight) we were beyond thrilled with the outcome.

It is the beauty of live music.  At 6pm as the uptown traffic looked scary and the snow was falling there was little, if any expectations.  "Boy the couch would be good right about now" I whispered to myself.

Today I am reminded that an escape from the mundane is just around the corner.  Counting the days til I search for it again. 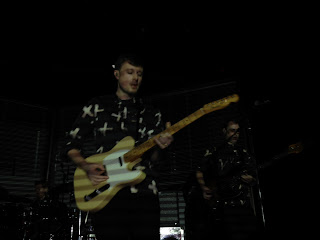