Back in the late 90s, when MTV2 used to play videos only, the Mark Oliver Everett creation known as eels had a few "hits" in heavy rotation.  His/their first single "Novocaine For the Soul", had the right amount of angst and ethos.  It was anti-grunge musically, but shared the same melancholy spirit.  It was hopeful and downright cynical all at once.  The video, shot by director Mark Romanek, was as captivating and beautiful as the song.  College radio loved the track and, for a moment, it appeared Everett, aka, E, was on his way.

Then things took a dark turn.   His sister Elizabeth (after suffering from depression for years) committed suicide.  His mother died of cancer shortly thereafter.  During and after the turmoil he began to cope.  He put pen to paper and wrote his second album, Electro Shock Blues.  The album gave an unblinking account of the dark moments surrounding his beautiful mind.  And the mind is beautiful.  E's father is noted physicist Hugh Everett III.  All Hugh did was originated the "many worlds interpretation of quantum theory."  His work at Princeton was first dismissed as irrelevant and scientifically unsound.   Years later those same theories were embraced and treated as revolutionary.  E's stories have been documented both in print (his autobiography Things The Grandchildren Should Know) and on screen (the brilliant BBC documentary Parallel Worlds, Parallel Lives.)  Should you be disinterested in the music of E, those two works are captivating in their own right.  For the amount of heartbreak, tragedy, and abject melancholy that has defined E's life, he somehow prospers.  Electro Shop Blues, while dark in spots, also had its moments of joy.  Last Stop, This Town is downright whimsical and funny.  The shit was getting real up in here.  E took it all in stride and saw hope in an otherwise bleak life.  The record was enough to make me a lifelong fan.

It was around that time I first saw Eels live.  Then I saw him/them again.  Then again.  And again...

Each tour has its own vibe.  Will he cover Missy Elliot this time?  "Get Ur Freak On"  Will he tour with strings and play in his pajamas?  "Trouble With Dreams"  Will he play a song(s) from Shrek?  His fingerprints are all over that series:  here "My Beloved Monster" Shrek scene or  here "Losing Streak" from Shrek or here "I Need Some Sleep"

Will he rock your socks off???  That answer is always an emphatic yes.  Sometimes it's gospel: "Looking Up."  Sometimes it's a bluesy and vampire themed: "Fresh Blood."   It's always original.  It's always exciting.  E is a God of Alt Rock and we should all be worshipping.

In a packed Webster Hall last Friday night church was in session.  And although many in attendance were more concerned about their own conversations and, more specifically their drinks, the smart ones in the crowd were treated to another killer performance.

E leaned heavily on his cheery 10th record, not ironically titled Wonderful, Glorious, during the nearly two hour show.   The new material has plenty to offer.  "On the Ropes" is a charming tale of hope.  "Peach Blossom"  is a straight forward rock tune.  Then E threw in his usual curveballs.  Take the Fleetwood Mac cover "Oh Well".  This ain't your Buckingham/Nicks Fleetwood Mac mind you.  This is blues rock with ample cowbell.  This tour has E bringing the guitar.  The Chet, now with E for 10 years, and P Boo helped make this song a highlight.   Shortly after this hard rocking tune E and The Chet renewed their "vows" to the tune of Bette Midler's "Wind Beneath My Wings."

In other words, it was a typical eels show.  Expect the unexpected.  Ventriloquists might open the show.  Clowns might come on stage before the show (and certainly during the encore!.) E will likely mention the wrong City during his often acerbic and comical song breaks.  He may also yell at hecklers, albeit mostly with tongue in cheek.  He will hug his band mates.  He will embrace his audience.  Kris Kristopherson wrote something years ago that describes E quite nicely.  "He is partly truth, partly fiction, a walking contradiction."

Rock star as anti-rock star.  An introvert in an extrovert world.  A pessimist with an optimistic point of view.

Mark/E/eels always leave you wanting more.  Friday night was no exception.  The alt world and blogosphere might bow down to new releases from 90s staples My Bloody Valentine, Garbage, Green Day, Dinosaur Jr and the like.  For my money eels is the best thing to come out of the 90s.  All other talk is sacrilege.

Back in 2011 I posted about an eels show in Williamsburg.  For years I was (and still am) the butt of many jokes regarding my affinity for E and his band.  You either dig it or you don't.  Turns out a certain photographer from Connecticut digs it.  Audra May commented on the post and we have been virtual friends ever since.  Friday night we finally got to meet.  Much like E's mash up of Mr E's Beautiful's Blues and My Beloved Monster we decided to use my words and her impeccable pictures.  For fans of music and photography please do yourself a favor and fan her on Facebook here or subscribe to her blog here.   Just do both already.  There will be pictures of cats!!  And isn't that what the interweb is all about??  Thank you Audra for these pics.  They make the ones I took look like, well, beloved monsters. 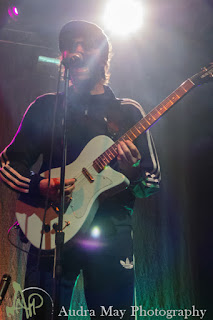 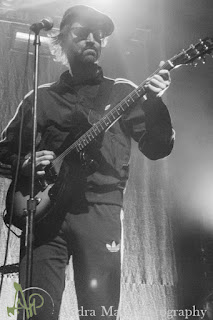 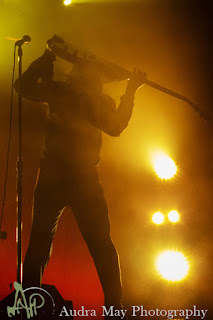 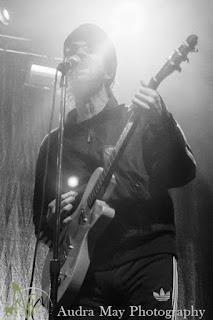 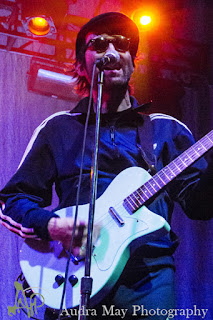 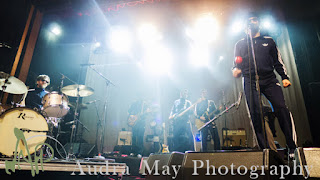 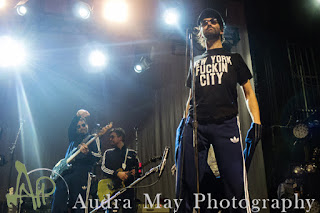 Setlist from DC show which was real similar.

Review of Eels 2011 Brooklyn Show by Audra May

How far we have come!  Rock on, spread the word, and thanks as always for your support.
Posted by HankB at 3:50 PM