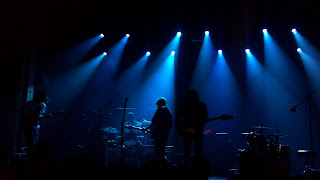 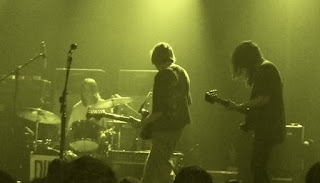 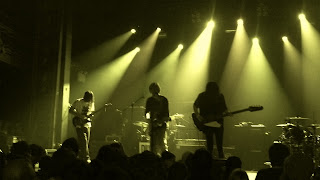 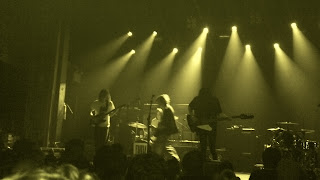 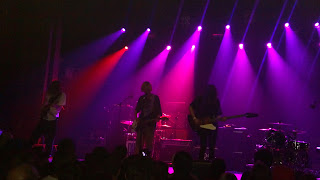 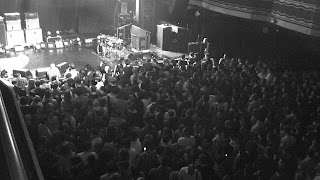 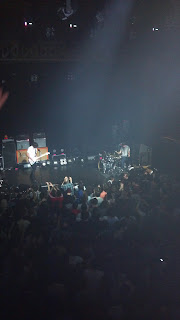 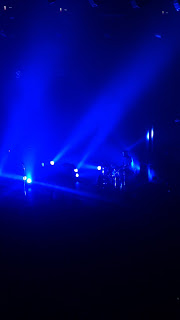 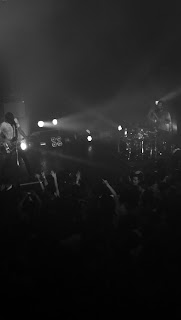 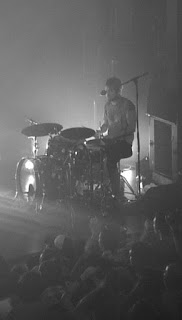 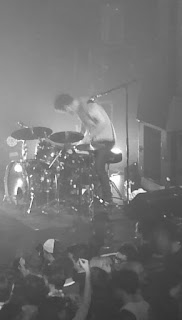 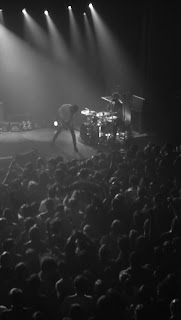 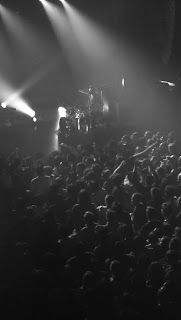 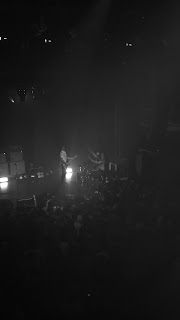 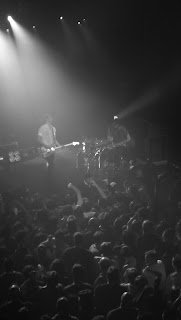 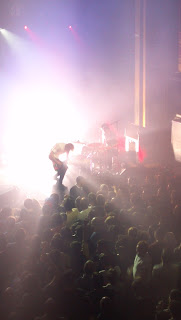 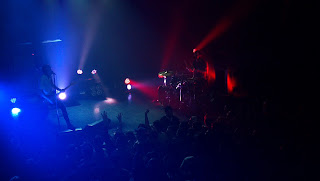 The end of year stuff is upon us.  After last nights Grammy Award Concert nonsense we can pretty much put a bow on the year in music, 2012.  And it was another good one.  Plenty of top 50 lists were released this week and this blog will probably be doing one in before years end  You can take a look at Rolling Stone and Stereogum lists here.

Tuesday a few of my personal favorites from 2012, Brooklyn's Diiv and Vancouver's Japandroids, shared Webster Hall's stage.  It was the first of a two night stay and one of the last stops on a marathon tour for Japandroids.  They played NYC earlier in the year supporting their marvelous sophomore LP, Celebration Rock.  They are following today's rock and roll blue print for success.  Put out an amazing record, sell it to whoever is buying (tv shows, commercials, itunes downloads), then tour the living hell out of it.  In June these kids (Brian King-guitar/vocal and David Prowse drums/vocals) played the much smaller Bowery Ballroom.   Less than half a year later they played to a sold out Webster Hall.  The second date was added as a result of this records success (and the deserved reputation of a Japandroids live show.)

Granted, King's voice was admittedly weaker due to the rigors of touring.  He was quick to point this out early on in the show.  "Can you guys help with this one?  It requires a lot of high c's?"  The notes folks, not the drink.  But when I compare Japandroids to another duo that played Webster Hall days earlier (Tanlines review 11.30.12) it is like comparing apples to monkeys.  It's the live drums I tell ya!   And the energy!  What an incredible energy!  Two Canadian kids, a drummer who won't quit, guitars and screaming vocals and rowdy white kids drinking it up like so many draft beers at a frat party.  This is testosterone rock.  No frills, aggressive, sing along and smile rock.  And the drums, the drums, the drums...  Watching Prowse play is jaw dropping.  Then he sings?  Ugh.  How on Earth do people possess this talent?  His light gray shirt was drenched and black within a few songs.  They opened with two crowd pleasers/radio hits from Celebration Rock: Adrenaline Nightshift and Fires Highway live from 2012 Pitchfork Festival.  It was a strong beginning to a whirlwind hour long set.  No ballads here folks.

The artists were most grateful for the crowds attention and admiration.  More than once King told them "You are keeping us alive."  He even ignored their absurd "Let's Go Rangers" chants imploring them to 'Stop antagonizing him."  He wanted only good vibes.  But he did sneak in a "Rangers Suck, Canucks Rule!" line mid-set.

They breezed through most of Celebration Rock and hit some numbers from their debut record too.  It was a hard charging and enjoyable effort.  Best of 2012?  You bet.  Expect more big things from these boys in the years to come.  Think Black Keys from Canada, eh?  Is MSG in their future?  It is not as far fetched as you might think.


Brooklyn's Diiv opened the evening with a brief set that highlighted their brilliant debut LP, Oshin.  The LP plays like a moody, haunting soundtrack piece not unlike a Real Estate, Caveman, Grizzly Bear, and the rest of that laid back, new So-Cal rock records of the past few years.

The live vibe is decidedly different.  The bass line is heavy and LOUD.  The guitars and jams are faster and more improvisational.  At times it seemed like they were trying to play as fast as they can.  It was as if someone was holding a gun to them from back stage.  Must.  Play.  Notes.  Quickly.

All that said, they were still very much in control.  The crowd that arrived for their set was older and very reserved.  My thought is this time next year they are headlining here and more young kids will be  on board.  Diiv consists of Zachary Cole Smith (guitars/vocals/clearly influence by Kurt Cobain), Devin Ruben Perez (bass), Andrew Bailey (guitar), and Colby Hewitt (drums.)

Other tracks you should be aware of:

Diiv Full Concert from KEXP  Note, Cole Smith loves him so very baggy, very comfy t-shirts.  It is the uniform I strive to wear in my everyday life, much to the chagrin of my wife.

Japandroids "House That Heaven Built"  Their final song of the evening.  A screaming, cheering rock anthem akin to a Hooters and Dropkick Murphys.

Japandroids "Days of Wine And Roses"