There are plenty of cool boutique hotels in NYC.  The Ace Hotel NYC on 29th St is among them.  What makes it all the cooler, (in addition to Stumptown Coffee Roasters adjacent to it and a badass lobby with ample space to power up your device or simply lounge)  is a new concert series called 5 at 5.  The idea is simple:  Bring a band on at 5pm sharp.  Said band plays 5 songs.  You go about the rest of your evening commute.

Yesterday NYC's Caveman brought a little love to the coffee swilling, art loving, Steve Jobs worshipping crowd.  Funny seeing/hearing the boys play "Old Friend" and "My Time" in an acoustic set.  But once you get over the initial longing for big, thrashing sounds it is apparent those songs, and some newer tracks like "Easy For You" and "Wasted Time", are just as effective stripped down.

Their debut album CoCo Beware may not have gotten the play it deserved.  However these guys are keeping things positive and seem very confident in their second album (which they are currently recording.)

The gentlemen will be headed to Austin for SXSW in the Spring which should coincide with their sophomore LP release.

This band should be on your radar and one can only hope 2013 will be their coming out party.

For more info on this event and further 5 on 5 shows take a peek at MTV's report here:  MTV The Hive on Caveman

And if you ever find yourself on 29th between 5th and 29th do check out Ace and Stumptown.  Worthy for the ambience and scene alone. 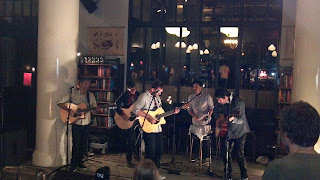 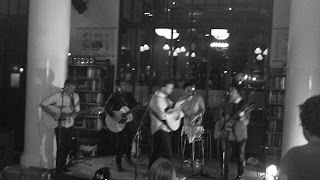 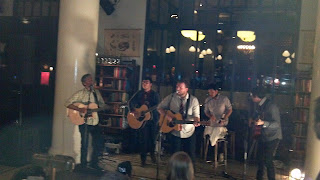