Terminal 5 Comes Alive... thanks to the Naked and the Famous.

Over the course of a year New Zealanders The Naked and the Famous have gone from opening act at Terminal 5,  NYC's Upper West Side venue, to selling it out as headliners.  They have a few more dates on what has been years long tour supporting their debut record Passive Me, Aggressive You, Without burying the headline let's just say they rocked the house.

For the layperson it might seem trivial to list all the band members.  After all, if you are not playing arenas are you worth learning about?  Isn't The Voice or Idol on anyway??

That might be the easy way out, but it short changes Aaron Short (electronics/producer), Alisa Xayalith (vocals/keys), David Beadle (bass), Jesse Wood (drums), and Thom Powers (vocals/guitar.)  They may not be the most flashy at each position.  But as a team you will be hard pressed to find a more polished unit.  And at their age???  Impressed.

Two things were abundantly clear during their blistering, high energy 70 minute set.  One, it is easy to tell they have been on the road for a while, and playing/crafting these songs night in, night out.  Each track, from the opening Go- Go's esque dance number "All of This" to their encore "Young Blood", was played with confidence and without a wasted note.  No chit chat between songs either!  There were some aww shucks moments of thanks toward the end which was sweet and sincere.  Then it was quickly back to the music.

Which brings us to point # 2.  This ain't  no beeps and boops act.  Make no mistake, synths and keys are present.  But not omnipresent.  The only produced number was their light show, which was captivating.  Whatever pre-conceived ideas regarding a rave, or glow stick vibe were erased quickly with a full on rock show.  Drums drumming.  Bass pounding.  And the flawless pairing of Powers and Xayalith's voices brought it all together.

"The Sun", a slow and brooding number, showed off the bands full range.  Each singer talking over one another with perfect harmony.  Short provided a Trent Reznor groove behind them.  The rhythm section kept the pace.

The curmudgeon might suggest they move some tracks (notably two of their two encores "Dadada and Serenade") to earlier in the set.  They were slower pieces that were ill-fitting after the raucous show stopper "Girls Like You."  But that is nit picking.  And they deserve better.

Oh and this just in.  Terminal 5 can sound pretty good too!!  After the Naked and the Famous, and Gotye and Grouplove in the weeks prior, the venue once again contained the sound and made it pop.  Do we now take a harder look at sound engineers as the prime culprits for echoes and reverbs that have haunted others.  Eels and Portugal the Man, two strong acts, were less than stellar here.  So too, many others.  A friend of mine has called it "The Place where Great Bands sound like sh%$."

Not so fast.  Once again an act with a careful ear and well crafted set came into one of NYC's largest venues and delivered the goods.

Does this bode well for upcoming gigs from The Shins?  Snow Patrol?  Maybe.  For full listing  head here:  http://www.bowerypresents.com/

But this much is certain.  These crazy kids from New Zealand are a first rate act.  Even if live music isn't your thing do give a listen to their excellent LP.  This is a band with huge promise. 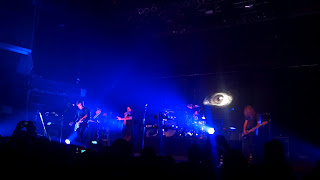 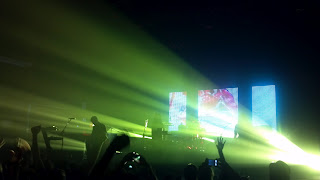 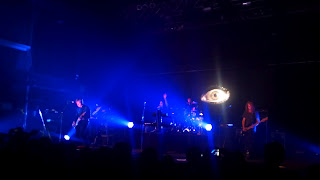 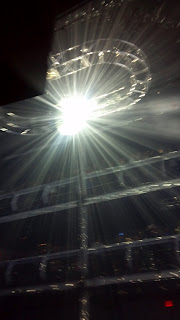 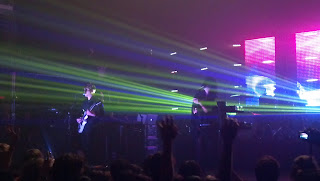 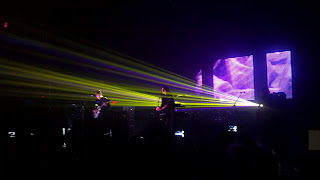 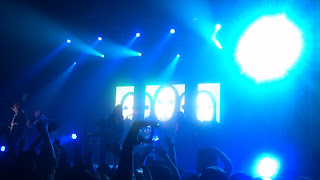 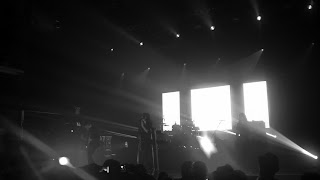 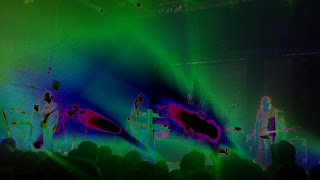 "The Sun"  Any wonder CW shows and Madison Ave love this track.  A most worthy track for dancing, selling cars, emotional climax or montage scene, cruising with the top down...

"Punching in a Dream"  Good use of visuals during this one.  Note the hockey mask photo above...  it was the display when "Breathing life into the nightmare" was sung.  Silly but strangely cool.

"Young Blood"  It may borrow Men Without Hats, and quite liberally for that matter, but boy what a fun song.  A nice way to end the proceedings and their certain calling card.

"Girls Like You" If you watch 1 of these videos make it this one.  Live version from The Lab.  Exhibit A thru Z on their live set.  It can not be overstated how the 80s have come back with a vengeance.

And further knowledge can be found here: