A visit to Occupy Wall St

A funny thing happened on the way to revolution earlier today...  I stopped caring.

First lesson in journalism, right?  Don't bury the lead.  Well there you have it.

I am fortunate enough to a) have the ability to take a few hours off on a glorious NYC afternoon (thanks T) and b) live and work near the greatest city I know.

Around noon today I realized the locker and shelving emergencies might be able to wait a few hours.  With that I took the 4 train to Wall St.  It has been several years since I was in that part of town.  I remember leaving the site of the former World Trade Center angry and bitter.  Here we were some 5 years later and the Financial district was desolate and longing.  The footprint of 9.11 was merely a large, vacant hole.  It was simply a metaphor for the giant hole our collective country was trying to climb out of.

Of course today, a month after it began, I headed downtown to take a look at "Occupy World Street."  Clearly when you judge me by my mortgage, salary and overall debt it is VERY safe to lump me with this 99 % everyone speaks of.

Perhaps this is the movement that will shake the foundation?  Big banks and political lobbyists will soon unite saving middle America from certain doom.  Donkeys and Elephants will breed a new, super animal able to tolerate abortion simultaenously injecting paralyzing agents into the veins of convicted felons.  Fiscal conservatives will be passing legislation allowing homosexual marriage.  Government agencies unable to handle large infrastructure will privatize and run efficiently (I am talking to you NJ Transit!!)

Pie in the sky horsesh&*^  I know.  But let's be honest, things could be better in the good, old US.  If a strong and vocal group can rally the masses into legitimate change and reform I am listening.

My initial impression of the movement headquartered at Zuccoti Park was unimpressed, to say the least.

First, as I have been doing for weeks, I question the location.  Granted, the park is very near the WTC and, to a lesser extent, the NY Stock Exchange.  Problem is you cannot get close enough to either.  The WTC site is a sea of construction personnel and road blockages.  The NYSE is tightly restricted with fences and horse mounted NYPD.

Anyone who knows Lower Manhattan will tell you the roads are narrow and the workers are surly.  It was a tight and logistically unsound area for tourism before 9.11, after and even more so today.  We all know the banks and corruption has as much to do with Zurich, London, the Upper East and West Sides, The Hamptons, New Jersey, LA, Beijing, Omaha, the Silicon Valley, Moscow, and everywhere in between.  Stage the damn thing somewhere in Central Park and have orchestrated strikes all over Manhattan.  The walk through the Upper East Side mansions last week was by far their most effective move.  Forward thinking suggests you can never get a large scale National discussion in one of the smallest parks in NYC.  If you want to think big, start BIG. 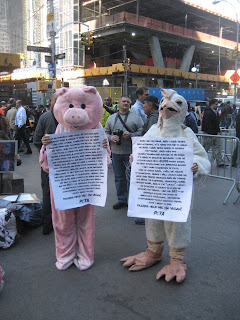 That said, once you have thought big in scope, think small in message.  Do I need to see folks dressed up as animals strumming up support for PETA??  The answer, of course, is no.  PETA needs to be throwing fake blood on fur coats in Milan.  They are not part of this discussion.  So the leadership should be telling these Halloween costumed freak shows to leave.

I am not sure I understood the impromptu drum session either.  Was I missing a "drumming up support" for Obama jobs package message?  Were they auditioning for X Factor?  I liked it, don't get me wrong, but the only thing that came to my mind was a Grateful Dead show.  They used to call the parking lot or gathering outside a Dead Show "Shakedown St."  It was where circus met carnival.  It was where you could listen to an offbeat husband and wife sing Joan Baez songs or buy a sheet of acid.  One van would be selling the best grilled cheese you ever ate while the next had hemp sandals at $20 a pop.

Oh, and their was politics too.  It leaned left (duh!!!) and seemed to have its heart in the right place.  Stuff like "Make love, not war."  "Can't we all just get along?"  "Hugs, not Drugs."  Ok, that last one is a stretch...  but you get my point.  Everybody had an agenda and if you listened closely they may have all had some good ideas.

I got that feeling today too.  Sure, more jobs sounds good.  Where do I start?  Oh, you haven't got there yet?

Yes, end corporate corruption!!!  But how??

Support our troops!  You bet.  But were we not doing that? 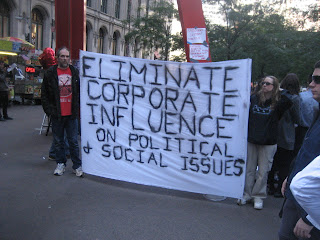 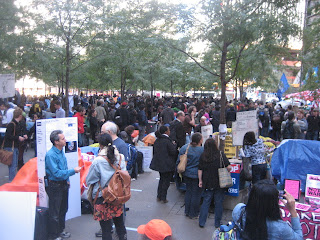 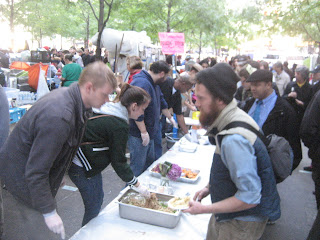 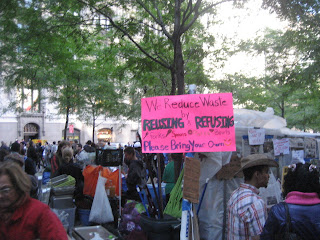 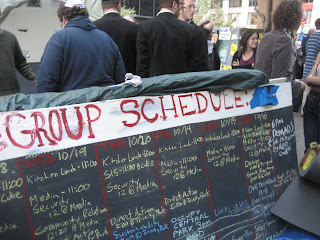 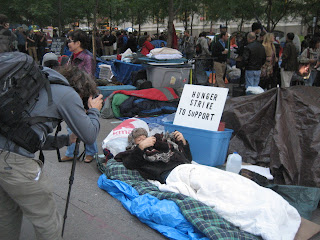 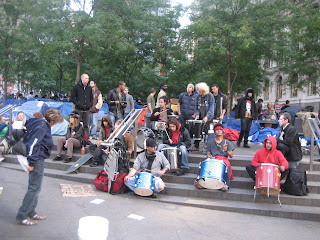 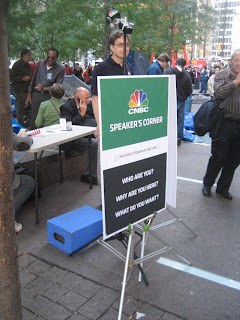 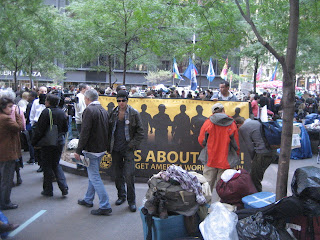 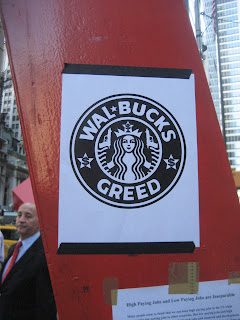 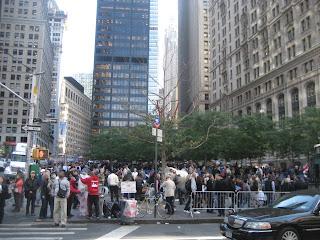 You know what encouraged me?  The immense buildings and significant progress made at the World Trade Center location.  Union labor hard at work.  Men in suits and hard hats mapping out the City's future.  Hundreds and thousands of commercial square footage being constructed before my eyes.  Jobs!!!  Then, seemingly then the projects end, more jobs for those people that will inhabit those buildings.  Perhaps Cantor Fitzgerald employs several hundred downtown again?  I dream of taking my family to a pretentious dinner overlooking the Hudson at Windows of the World 2, on the 1000th floor.

The best revenge for the sheer horror inflicted on us 10 years ago.  We can be bigger, and we can be better.

And I wondered if the folks at the park even took notice?  Hell, you can't miss it, right? 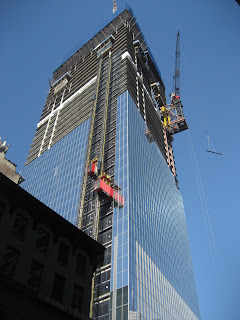 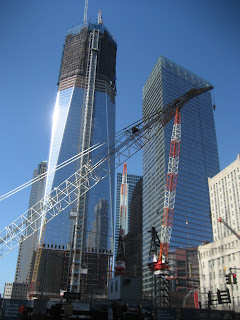 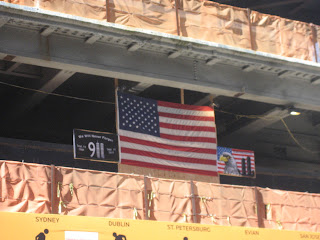 I absolutely love seeing America building, making, thriving and succeeding.  I got some of that today.  It was in tourists surrounding a once dormant area and breathing some life into it.  It was in overcrowded restaurants and sidewalk congestion.  It was cranes and steel.  It was the City alive and full of optimism.

If the movement set out to achieve all of that by jolly they have.

Something tells me they are aiming higher and with more purpose.  I will be patient.  It is the ground swell that has me encouraged.  More than that, their is an excitement in Lower Manhattan that has been missing for too long.

The pebble has the potential to have the might of a boulder.  That jury is out.

A good friend explained quite succinctly why I was encouraged more with the construction than protests.  The new buildings will grace the NYC skyline through my daughter's life.  The protests might fade away in weeks.