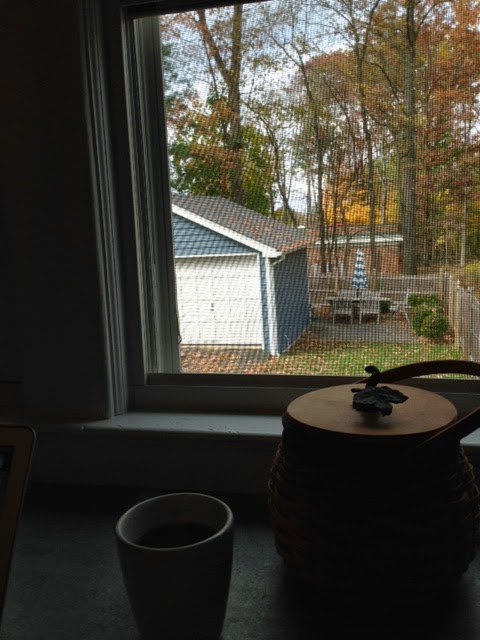 Cause I could sit here and bitch about tuition bills.  Still not sure if/when I can cut that check.

The looming basketball season is on my mind too.  How are we going to make it all events with 1 car?!  Nevermind the coaching!  Don't these kids deserve better?

And parenting?  Don't get me started.

Since when did going to the mall for a pair of jeans mean Neiman Marcus and $200?  She better wear those things 200 times.

Two menstruating women in the house is a game changer too.

"Thanks dad, I love you" can get to "Get out of my room I am done to talking to you!" all during the opening credits to Vampire Diaries.

Yeah, that kinda sucks too.

But all the shit, all the minutia, is worth every ounce of sweat (and healthy amount of my tears.)

The vibrant leaves and temperate weather has served as a reminder of nature's beauty.  These are the colors you just don't see all the time.  And any reproduction, although sometimes brilliant, is never quite the same.

Tonight, in Kansas City, MO of all places, baseball will determine its champion.  One game decides it all.  For San Francisco, an opportunity to become a legitimate Dynasty.  Should they win tonight they will be crowned a 3rd time in 5 years.  *editor's note- Madison Bumgarner is amazing!!!  A better October performance I never witnessed.  Congrats SF- you are worthy Champions.

IF KC wins, we have the culmination of an extraordinary Cinderella run.  * sucks.  sorry KC

But most of you won't watch.  Last week, Game 1 of America's pastime lost in the ratings battle to Geeks (Big Bang Theory) and the undead (The Walking Dead).  The Baseball is a regional sport- and New York, LA and Boston are no longer playing.  This country is tuned out.

I am not one of those George Will, "baseball is life" devotees.  However, when the game, especially in October, is played right, no other sport matches the drama.  The Super Bowl is one event and the  games are too often non-competitive.  Hockey playoffs are close, with the physical intensity and rivalries.  NBA?  No.

In baseball managers are second guessed dozens of times a game.  Players need not be physical deities.  Look at Escobar, the KC shortstop.  That kid is tiny.  And think of this:  You could probably play a few innings in RF and no one would notice.  Could you line up a TE in an NFL game?  How about skate the third line for the Maple Leafs?  NBA?  No.

Missouri had a rough summer/early fall.  Each night Ferguson , MO has the potential for a race war. For a few weeks the Royals have proven a nice diversion.  Which, when you think about it, is the purpose of sports.  We can get away from all the nonsense that is out there.

Its the little shit you have to concern yourself with.

And there is a lot of it.

Tonight I can cross of a bucket list band:  Wilco at the Capitol Theatre.

It will mark the end of a productive live show month.  See below clips for a small selection.  Note, Orwells and Skaters at Asbury Lanes was a great double bill.  Unfortunately I deleted those videos.  Trust me, the bands AND venue are worth a look.

Icewater at Babys All Right


As of this moment, mere days from November, we still do not have a platinum record for 2014.  It would be the first time this has happened since they started keeping track of record sales.  One million units is platinum.

Taylor Swift figures to save the day when she releases 1989 next week.  Forecasts show it selling a million units in a week.

What does that say about the industry?  Or is it saying the same thing (just louder) since Napster was born and began its assault on the studio system?

I know I enjoy listening, maybe now more than ever.  But I don't BUY music.  I pay to see it, lots of it.  But I want to purge my CDs and digital streams are just fine for me, thanks.

So am I part of the problem?

I don't see it that way.

Seeing bands and promoting their efforts is how bands make their living.  Dave Grohl, who is the the midst of rolling out his new LP, recently said "We used to tour to promote the record.  Now we promote the record during the tour."

His new show, Sonic Highways on HBO, is amazing television.  In it, Grohl examines the history of rock music in America.  His exploration takes his to Nashville, Chicago, New Orleans among other cities.  Each town has a club, or engineer, or local legend that has helped provide the soundtrack to Grohl's life.  He, and his contemporaries, have helped carry on the lesson.

It is our responsibility to pass on the knowledge.


That said, here is the monthly list.  Enjoy, spread the word, and support an artist today.

The Rua "Fight for What's Right"

The Rua is a brother and sisters act from Windsor, United Kingdom.  The video caught my eye a few weeks back.  Anyone have Palladia?  If so, season pass the Epic Awesome Videos morning show.  I know, the show name is super queer.  But over the three hour show (fast forwarding most of it) the producers present some unique and sometimes obscure songs.  This rallying cry from today's youth is about what you expect from kids who think Oasis' Whats the Story Morning Glory is better than Abbey Road.  Everyone thinks their generation is better than all else.  Least these kids are taking their angst and making song from it.  Beats Xbox any day.

Linus Young "Fun in the Sun"

Local duo Iris Belson (Freehold, NJ's own) and Joseph Walker are Linus Young.    I was introduced to them when they opened for Tove Lo earlier this month.  Their live act is still, shall we say, maturing.  Sharing the bill with Tove Lo did them no favors as they really aren't as "pop" as she is.  On record, and on this track in particular, they showcase groovy guitar licks and solid harmonies.  The video is a campy trip down music video history (which my Facebook page did a lot of this past month.)

Broncho "Class Historian"
Tulsa, Oklahoma band who, among other things, will open for Billy Idol at the Beacon Theatre in January.  If that rebel can dig them, you should really give a listen.  Guitar straight from 80s John Hughes soundtracks.  Skinny ties, oversized sunglasses and Louden freaking Swain.  Easily one of my favorite tracks of the year.

Perfume Genius is the brainchild of Mike Hadreas.  Their/his 3rd album "Too Bright", has garnered much acclaim.  Like many of the songs that appear in this space, I needed my hand held.  The Rolling Stone writer and SiriusXMU DJ Jenny Eliscu raved about it during a talk up a few weeks back.  I figured, if she likes it, I gotta pay close attention.  And I did.  This is a lesson in slow build.  Its the kind of song you just know would highlight a live act.  One day, I hope to see/hear just that.

Segall has been doing it for a while and it seems like he puts out 2 records a year.  This month I finally got a chance to see him and it was NOTHING like I expected.   If you listen to this song it is clear Segall has some deft touch and can craft a song.  Live, he just unleashes fury.  Guitar strings be damned!  It is thrash punk California style.  Mosh pits.  Bloody noses.  Blood, sweat and tears.  On a Wednesday this old man can't handle it.  That is, I need a heads up.  Moving forward I will enjoy Segall in the comfort of my home.   You should to.

Walk The Moon " Shut Up and Dance With Me"

Let's not kid ourselves.  Walk the Moon is pop!  Like Neon Trees, Maroon 5, Train, whomever...
And that is just fine.  Their sophomore LP, Talking is Hard, will be released 12.4.14.  If this first single tells us anything, is that the quarter from Ohio knows a hook when it sees one.   Expect a spring tour- and note they are capable of good things live.

I kinda missed the Emo days of late 90s into the 2000s.  My Bloody Valentine through My Chemical Romance totally escaped me.  Had I been dialed in I would have known who the F Gerard Way is.  First, he grew up in Summit, NJ (mere minutes away from this computer.)  Secondly, he was the voice behind My Chemical Romance.  Now, while I hated all they did, I certainly understand their significance.  I also know many who love/adore them.  When this single started making the rounds I took it for what it was worth.  When he sold out Webster Hall I paid a little more attention.  Now, I pass it on to you.  You can thank me later- or bitch slap me depending on how you feel about it.

Toronto, pop band with an ear for nostalgia.  Their self titled debut record was released in July.  Molly Rankin's nasal twang is not offensive as you might think.  In fact, she conveys longing quite well.  A distinctive Lo-Fi gem on your otherwise nondescript radio dial.  And who is named Archie anymore??  Maybe she is thinking of the old comics?  Would 20 somethings even know that Archie???

Atlanta based Manchester Orchestra are on their (6th) record.  Cope was released early this year and this song is a winner.  Hard driven guitars combined with Andy Hull's somewhat distorted voice make for a hard charging joy fest.

It comes full circle don't ya know.  These Scottish lads are influenced by My Chemical Romance and their brethren.  Emo for the 2014 set.  Lil angry.  Lil cocky.  Lil fun.