There are a few noticeable gaps in my New Jersey upbringing.  I tend to hate all the New York teams.  Yankees, Giants, Mets and Jets be damned.  I have spent more time on North Carolina and South Carolina beaches than those just a quick drive south on the Parkway.  Bruce Springsteen is someone who has my respect and admiration.  But I am far from a devotee and have never seen him live.  At this point in my life I figure why bother.  3 hours?  $200 a seat?  I can watch a DVD or pump up "Born to Run" and be perfectly fine.  That is not to discount all his followers.  I get it.  He rocks your World and you will stop at nothing to touch his hand.  For me, that ship has sailed.  His continued work on Jimmy Fallon makes me think he is in on the joke too.  Oh, and some of the early reviews of his new record have been lukewarm at best.

We could start a whole discussion on the other NJ band powerhouse, Bon Jovi, but why bother.  It boggles the mind how they sell out stadiums and are nearly as beloved as Bruce.  Not here.   In 2014 I vow to be more positive.  Instead of saying I just don't get it, I will simply say "agree to disagree."

And I am also making an attempt to get more Jersey Boy.  No, that does not mean a Yankee hat will end up on my head.  No wife beaters and gold chains either folks!

Rather, last week I finally made it to Asbury Park's legendary Stone Pony.  This year the place that launched Bruce, and several others, is celebrating its 40th year.  Florida rockers Against! Me headlined the all ages Friday show and it was the perfect introduction.

The place is a dive, let's be honest.  And I mean that as a high compliment.  The pit is long, but not necessarily deep.  There is a back bar covered with a temporary tent.  Adjacent that smokers have a spot to light up.  The real treat is the Pony Cafe located in the rear of the building.  There are some tables, benches, a rather large bar, tvs (which last Friday had Rangers hockey playing) and a greasy kitchen.  Burgers, pretzels and old fashioned bar food much like find at your local public pool.  the bartenders were short and aggressive.  The prices were fair.  The bar was more than adequately stocked.  Us old folk like Guinness and Stoli O.  Check and Check!

Pity the young hipsters who crave PBR.  They ran out of cans about half way through the show.  Seriously, do they really like the taste or is it the price?  The whole phenomenon confounds me.

The show was secondary last Friday.  We bought tickets months ago and just wanted to soak it all in.  Karma was on our side too.  We brought a friend and she had no ticket.  It was not sold out when we started our trip.  When we arrived it was.  She was a trooper and said she would have dinner at one of the many restaurants on the boardwalk.  It should be noted that the boardwalk and Asbury Park itself have gone under a major resurgence.  If you have the chance take a day trip when the weather is nice.

Needless to say we felt bad and wanted to get her in the show.  I asked a young man inside the club "if he had a ticket source either inside or outside the club?"  Seriously, the first person I asked!  Sure enough he pulled a ticket from his pocket and said "here."  A quick text to our friend and she joined us.  She didn't even finish her glass of wine.

All ages shows are tough, especially with a band who mixes it up a bit.  My better half made her way to the stage.  My old ass was content watching from afar.  Singer Laura Jane Grace, and her story, is well chronicled.  Long story short, when I saw Against! Me open for Silversun Pickups a few years back Laura was Tom Gabel.  Their new record, Transgender Dysphoria Blues, speaks in large part to Gabel's transition to Laura.  Her voice is the catalyst for the record, and more often than not, the bands live act.  Unfortunately Laura was nursing some sore pipes and could not belt out many of the high notes and power lines that she is accustomed.

Her supporting mates (James Bowman, Inge Johansson and Atom Willard) were more than game.  The new material sounded fresh and the kids ate it all up.

I was just as interested in taking the whole scene in.  I found myself drifting to walls and examining the history of the building.  I people watched and saw mothers shield their sons from flying humans.  It was a rock event and plenty of folks seemed fully engaged and entertained.

That, for my money, is a terrific Friday night.

I missed my chance to see Yo La Tengo at Maxwell's.  Other venues await.  Starland?  Count Basie Theatre?  This NJ kid needs some learning.

See you out there. 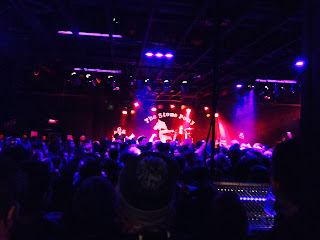 Some raw video from the show below

Against! Me "Thrash Unreal"

Against! Me "I Was A Teenage Anarchist"