It was a pretty shitty week.  When Friday rolled around my wife asked me to meet for lunch.  "It is a vodka rocks kind of day" she said.  "They all are, aren't they?"  I wondered.  It is because we have certain responsibilities we don't drink ourselves into oblivion.  It would be more fun, wouldn't it?  And a whole lot easier.  We managed to get through it though (relatively unscathed.)  As we stepped foot into the Roseland Ballroom last night we got some vindication.  This is what the payoff is.  Art.  Culture.  Entertainment.  The day to day struggles feel far, far away in the presence of art.  It is a gathering of friends.  It is the re-telling of stories.  It is hugs exchanged.  It is smiles shared.  And for a few, maybe even that vodka rocks (or 3.)  It is the reason we live where we live.  For four or five hours we could forget about the home we lost out on this week.  We had a contract and were outbid if you are scoring at home.  We could forget about our own home inspection that had its own share of missteps (it was built about a hundred years ago folks, it ain't new construction!!)  Credit card bills and homework assignments be damned.  Bring on the rock and bring on the roll.

It is somewhat surprising Australian act Atlas Genius released their debut record (When it Was Now) this week.  Their song "Trojans" has been kicking around for years.   Since we had our 10 year old with us we arrived very early.  We were surprised to find the floor 3/4 filled at 7:30.  Apparently the buzz is great for these guys.  The band consists of vocalist and guitarist Keith Jeffery, his brothers Michael on drums and Steven on bass and Darren Sell on keyboards.  Their set was pleasant, if not earth shattering.  After a few songs my daughter leaned over to my wife and commented "their songs all kinda sound the same."  Out of the mouth of children I thought.  But you know what, she was right. Keith's voice is fine and his guitar work beyond capable.  There were two things working against him/them though.  First, Roseland is a big room.  As they have a more intimate, laid back vibe, it was difficult for them to fill the air with sound.  Their sound is mood based with little room for jams, or free wheeling improvs.   They have a Sting/Police thing going for them which, in my opinion, is being done  better by South African band A Civil Twilight.  They had a record release party at Music Hall of Williamsburg earlier in the week.  That room, and ones like Webster Hall or Irving Plaza, suit them a bit better.  But when asked to open/play a venue this size you have to take it.  We just don't have to love it.  The second issue was production value.  When Imagine Dragons hit the stage a half hour later that point was driven home.

For more Atlas Genius:  "If So"  fun little song that was my favorite from last night.
"Symptoms"  The song they open their set with.
Atlas Genius official site 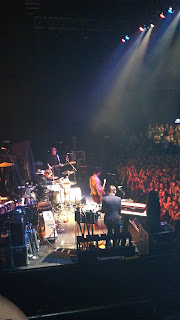 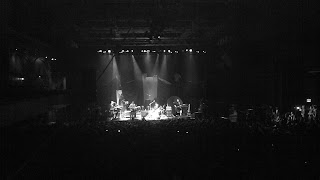 By now everyone has heard Las Vegas rockers Imagine Dragons monster hit "It's Time."   When Glee does a version of your song it is not, in this blogger's opinion, a good thing.  Mainstream success can be a great thing.  Gotye, Fun, Of Monsters of Men and many others have crossed over and become pop stars.  Imagine Dragons are no different.  Like those other acts it turns out they have an impressive catalog and can play the holy hell out of it live.  Throw in the production values befitting a headliner (crisper sound, light show, and most importantly a giant tom tom we called the "Radioactive" drum) and let's just say Imagine Dragons are a rip roaring, energetic and fun time.  Get. On. Board.

"It's Time" might be the track that gave them fame, but ""Radioactive" is clearly their signature song.  For the record, the video is maybe the worst ever.  Weird puppets?  Lou Diamond Philips as weird puppet war lord?  Weird puppet cock fighting?  In any event, the song is genius.  The song live is epic. Big percussion.   Rock anthem, sing along lyrics.  Driving bass and angry, but elegant guitar licks.  Add in the free wheeling, improv chops that Atlas Genius did NOT have and we were left mouths wide open.  It was a soaring high point and worth the price of admission.  It is why we left shortly thereafter.  It could not have gotten better!  OK, maybe some excess vodka and the age of our daughter had something to do with leaving before the money shot. (do we really need to hear "It's Time" again anyway??)  Sometimes it is good to get out while you are riding high.  And this morning I find myself wanting more.  Last night was proof very positive that these guys are not going anywhere.  Count me in for their next stop in the greatest City on Earth.  And it is safe to say that the sold out crowd that adored every minute feels the same way.  Download their debut record Night Visions and thank me later. 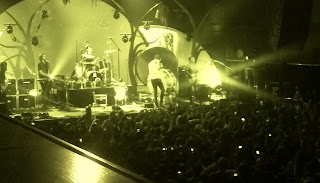 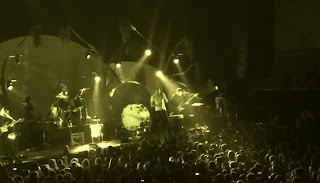 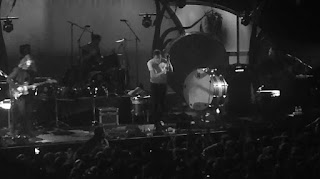 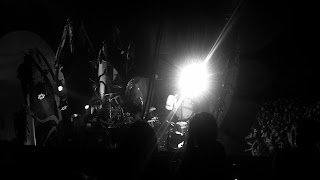 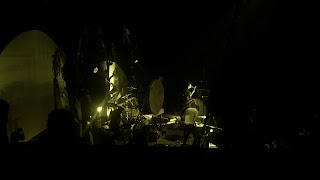