Williamsburg on the Cheap... starring White Rabbits and We Barbarians

Folks here in Jersey think of Brooklyn as some sort of other-Worldly hipster planet.  They know Peter Luger's and Coney Island.  They know little else.  Watching Do the Right Thing does not count.

And perhaps the best kept secret of Williamsburg (at least for those willfully out of the game) is Bowery Presents wonderful music venue, un-ironically called Music Hall of Williamsburg.  Last night, Converse Rubber Tracks, the sneaker company's community-based music arm, put on a free showcase spotlighting two of Brooklyn's finest acts: We Barbarians and White Rabbits. 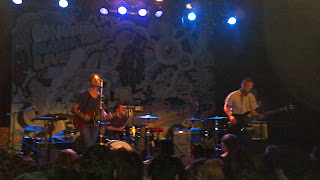 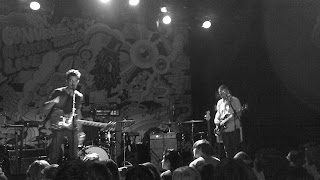 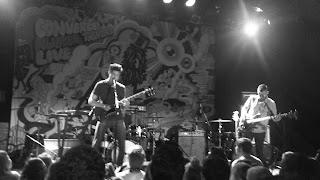 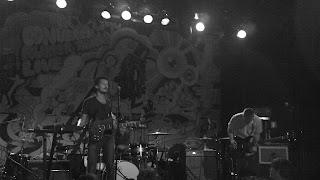 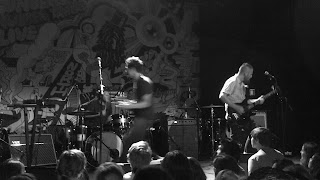 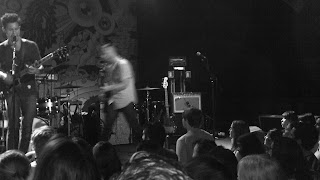 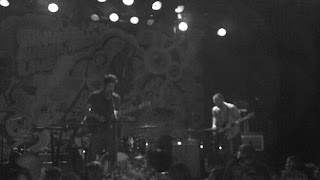 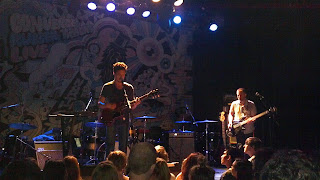 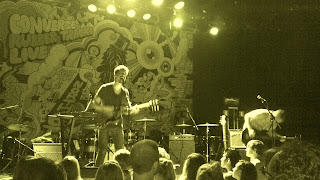 We Barbarians, a power trio made up of David Quon(vocals/guitar), Derek VanHeule (bass) and Nathan Warkentin(drums), began the night with a high-energy, hard-rocking set.  Quon is an absolute natural.  Not only does he play a mean guitar, but his voice and charisma are electric.  But you cannot simply thank the leading man.  Warkentin has the look of an angry woodsman as he relentlessly assaults his kit.  He is precise, but has enough tact to be jazzy when needed.  VanHeule has the chops to play lead, but also knows when to keep beat and stay efficiently in the background.

This is a rock and roll trio.  Go buy what they are selling.  Then do yourself a favor and check them out live.  They are an entirely different act studio to stage.  To date they have recorded a few EP's and one LP, 2009's There's This There's That.  A new record is forthcoming and the material is strong.  We came for the White Rabbits, but are now Barbarian devotees.

References:  "Headspace" official video.  The bass line for this track is downright filty. It also reminds me of the Vision Quest soundtrack.  Can't you just see Loudon Swain training to this???  Is it "Lunatic Fringe" worthy?   Or "Chambray" official video.  Tribal beats= Awesome.

There have been plenty of superlatives written about the grossly underrated and amazingly under-heard 6 piece rock act White Rabbits.  In fact this space has devoted two columns to them:  Webster Hall review from 4.13.12 and Bowery review from 2.11.

Last night, again supporting their 3rd LP Milk Famous, they breathed new life into their catalog and reminded all those in attendance why they are a formidable live act.

The new material, such as the groovy and hard charging "Danny Come Inside" and the trippy "It's Not Me," marry nicely with their more popular tunes, namely "Percussion Gun," 'The Plot," and last night's finale "Kid On My Shoulders."  "Kid" has been rearranged and outright re-imagined with a bass-heavy, disco feel.  The result is fresh and inspired.

It can be said with certainty that luck and timing have as much to do with a bands success as raw talent these days (like all the days before.)  For every Maroon 5 or Train (both great bands who have enjoyed longetivity and commercial success) there is a White Rabbits or We Barbarians.

Both acts last night packed a wallop and went about their business as professionals without the slightest hint of pretense.  White Rabbits are very much the workingman's rock outfit.  Thing Bruce Hornsby and the Range on steroids.  Each musician complements one another and each component stands out.  It is a team.  And the team is winning.

Yet America, for the most part, is not in on the secret.

You heard it here...  these guys need to be bigger.  You can help.  Get the hell on board.

After all Adam Levine and Pay Monahan are pretty set up.  They can afford to share the wealth. 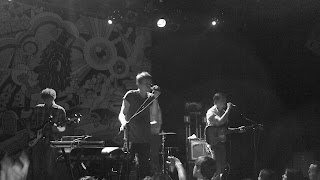 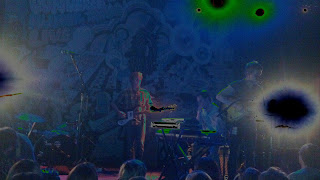 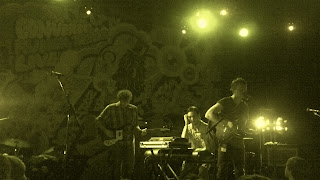 White Rabbits from Jimmy Kimmel perform "Danny Come Inside"  An absolutely epic track.  Big, bold bass and haunting guitars.  The kind of stuff David Lynch might use on his soundtrack.  The real standout from their latest LP Milk Famous.

"Percussion Gun"  Their breakthrough hit from 2009's It's Frightening.   Like the title says, this track is all about the drums.  If they are too have a signature song you can't do much better.

Live "Kid on My Shoulders"  They have the ability to use piano as lead...  or drums...  or guitar...  or bass.  So versatile!!  Here the piano and bass shine and shine brightly.  You can tell they love performing this song.  This version differs greatly from what was played last night.  Both are exceptional.  Just like the band.

There have been 45 minutes delays at the Holland after a Webster Hall or Bowery show!!  Brooklyn is a viable player for those in and around Manhattan.  Believe it!!

The crowd was super respectful and well mannered too...  which is huge.  No talking during songs.  No back and forth for drinks or bathroom breaks.  It's a one hour set and the crowd was engaged.  The music was the star and they were more than aware.  Oh, and bravo to both bands for limiting the between song banter.  They were both humble, gracious and off the charts polite.  Then they knocked everyone off their feet with kick ass rock and roll.

And as noted earlier the Music Hall is an exceptional place to catch a show.  3 floors with ample lounge space and above average service/polite staff.  If you can do Lower Manhattan you can do Brooklyn.  Check out their coming attractions and make a day of it!!  Viva La Hipsters!!