I have given plenty of thought in recent months on what it is I am doing here?

Who really gives a shit about the random rants, political and economic discussions, and pretentious alt world music reviews that litter this space.  The internet has far more committed and talented journalists capable of satisfying these needs to the masses.  Not to mention, having a full time life ( family, "career", volunteer work) can be draining.  There are days when I finally get on a chair, or in front of a television around 10pm.  By 10:15 I am sound asleep.  Sitting down to right the endless thoughts that pop up during a day is akin to me doing carpentry, trigonometry, or pilates.  It ain't happening.

There are, however, a few nights in a month where I throw caution to the wind.  For me, the happy place (aside from my wonderful and loving family) is watching live music.  I fear if there was no outlet for the tensions that can arise from the life described above heads would roll.

Why else would we live and work here?  It's a huge challenge.  Think about this, if my wife and I want to use mass transportation to GO to work Monday morning, it will cost us $44.   Let's say we go in 3 days next week?  Or 4?

That is real money to simply GET to work.

Not really bitching about it mind you.  It is just an observation.  A few years ago it became more clear that this world is too fragile.  I find myself buying condolence cards.  I am scared to step on a scale.   My disparaging comments are now frequently heard by strangers in addition to the voices in my head.


Still, there is no way I want to sputter along in the slow lane as the 1% laps me.

It is gonna be hard for me to get to the 1%.  I now consider myself early 40s.  I grew up in a blue collar New Jersey town, the son of hard working parents.  It was middle class America and absolutely wonderful.  Both of my folks worked and did all they could to provide and ensure my sister and I would have more than they did.  I was the first one to go to college in my family.  I will never forget sitting in my basketball coach's office listening to him beg the Admissions Department to accept me.  "He's a good kid, take a chance" or something like that.

I did just fine in school, but never had a clue as to what I wanted to do.  Anyone who reads this blog o or knows me can tell you I still don't.  For about 11 semesters I thought all I had to do was graduate.  Wait, what?  You have to get a job (you love.)  You have to buy a house?

Thankfully I got the wife and kids right.  Sure, it is more Al Bundy and Peg than Rob and Laura Petrie.    But that part is rock solid (smooth soft 70s rock mind you- think Boz Skaggs.)

If they had the testing available in my scholastic career it would not surprise me if I were diagnosed ADHD or appeared somewhere on a learning disabled spectrum.  Back then, in the hills (and sticks) of West Jersey, I was perfectly normal.

Whatever the case, somehow I ended up in a quaint New Jersey suburb.  Naturally, we arrived a year or so removed from the train line going direct to Manhattan.  Consequently, housing prices were at all time highs.  And it was a year or so before 9.11.   The idea of getting steady employment in NYC seemed like an easy proposition.  For someone like me, very little skills as it pertains to generating income, it proved difficult getting work before the Towers fell.  Bin Laden just slammed the door on whatever hopes had remained.

Through it all, the one constant has been music.   Gomez provide the soundtrack for the many phases of my  marriage.  Ben Folds and Eels were the sound of lullabies with my daughter in our one-bedroom apartment.  The Psychedelic Furs speak to moments in my youth, as well as today.  Peter Bjorn and John remind me of Hilton Head.  Savages and Foyygen are 2013.

So too are Pacific Northwest folk rockers The Head and The Heart.   More specifically, they represent why it is I continue this blog. On this lovely Saturday afternoon I sit (in full hipster-mode mind you: hoodie, Mac laptop, Simple sneakers AND in coffee shop- can someone come smack me in the face???!!!) and remember good times.

It has been a few days since I saw them at Webster Hall and I am still riding a bit of a high.  I have been playing their new record, Let's Be Still, nonstop.  That album's single, "Shake" , brings a constant smile to my face.  I thought good things about the band before Wednesday night.  I think better thoughts now and look forward to seeing them again, real soon.

We arrived late to a packed Webster Hall and could get nowhere near the stage.  The band, led by singer/guitarist  Josiah Johnson (looking strikingly like Billy Crudup in Almost Famous), is the latest in the folk-pop boom that has dominated the alt-world.  Think Ben Folds, Avett Brothers with a twist of Grouplove.  The songs are all well crafted and the live execution is tightly rehearsed and executed.

It wasn't until this humble writer ended up on stage to witness  "Lost in Your Mind" that the night became unforgettable.

What's a learning disabled underachiever doing this close to a band at NYC's premier night spot?
The free entrance and street parking made the night epic enough.  Hell even our alligator armed friend bought dinner.  We were playing with house money.  Now this?  On stage taking video??

It was short lived and I was asked to step down after about 5 minutes.  But that moment speaks to something more I think.  A few years ago I was catching a few shows a year and nothing special.

Now I sometimes define myself as a journalist.

This space doesn't pretend to "guide" the reader anywhere.  It is a guide for me and for those who see and do things out of the ordinary.  For those folks who know government shutdowns and rigged elections are pointless wastes of time.

I think that is many of you.

If The Head and The Heart does not motivate you,  it's cool.  But here is hoping you get motivated by something.  Thor at the Regal 10?  The MoMa's Matisse exhibit?  Binge watching Breaking Bad?

It's all good.  Check us out here and join the conversation!

Thanks so much for your continued support and taking the time. 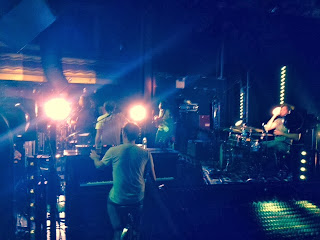 Head and the Heart "Lost in Your Mind" live

Email ThisBlogThis!Share to TwitterShare to FacebookShare to Pinterest
Labels: 11.6.13, Head and the Heart, Lost in My Mind, Shake, Webster Hall