There are lots of folks who continue to write, blog and otherwise opine that "rock" is dead.  Listen to the pop stations these days and it is easy to get sucked into to that opinion.  Katy Perry's "Roar" plays more like a lamb, than lion.  Miley Cyrus and Robin Thicke are remembered more for their "dancing" than the Marvin Gaye cover they "sang" at last months VMA's.

This space continues to seek out and (hooray!) find bands who are more concerned with crafting songs, playing guitars and leaving their rabid fan base wanting more.

Some, like Georgia based, but New York raised, Deerhunter, remain humbled and happy to simply play in front of an audience receptive and beyond willing to hear what they have to offer.  Singer/Guitarist/Frontman Bradford Cox said as much half way through their fast paced and electric show last Thursday night.  "We may be from Georgia, but in many ways we call New York City our home" he stated toward the middle of their hour and half set.  Or something very similar to that.  They recorded all but one of their 6 records here, including newest release Monomania.  The Webster Hall show last week served as one of the final gigs of the tour.  Call it a homecoming of sorts.

Truth be told Cox is a mystery.  What little I read of him prior to the show did not prepare me for his arrival on stage.  Note, this is the second show in the past few months where the leading "man" was dressed as a woman.  Laura Jane Grace played Bowery not that long ago.  It should be noted that Laura is transgender and Cox has described himself as both gay and asexual.  It's all good, which makes the NYC shows/audiences so freaking cool.  To the many kids in attendance his dress and wig were not a big deal.   What is more alarming is Cox's weight, which comes as a result of Marfan syndrome.

His affliction, which is a genetic defect causing long limbs, thin fingers and an overall narrow body type, is what kept him away from the schoolyard as a kid.  His introverted personality led him to a fondness for music and an outlet for all the harms and torments associated with growing up "different."

It is said he related to Tim Burton's Edward Scissorhands...  but that could simply be Wikipedia inter-web fiction.

It was four or five songs in, most likely during the eerily wonderful  "Helicopter" from 2010's Halycon Digest, that Cox's health became less a concern.  He was at ease and relaxed.  His voice was crisp and emphatic.  On stage nothing else matters.  He had a packed house in front of him and a smile on his face.

Deerhunter plays rock and roll music.  3 guitars, a bass and drum kit is all you are getting.  Cox has a deft touch with mixing new and old.  "Revival" and their newest single "Back to the Middle" could be mistaken for 1970s roots rock.  "Desire Lines", the only song NOT sung by Cox that evening (handled most capably by Lockett Pundt), is a celebration of psych rock with an emphasis on guitar jamming.  Cox and Pundt traded riffs for 6 or 7 minutes and it could have gone on far longer with no arguments from anyone.  It is, simply put, a terrific rock song.

It was all high energy and plenty of happy vibes.   Do I need to see them again?  Probably not.  But for a moment, it was joy.

This week has been very difficult and writing this review has been a challenge, albeit trivial.  My community is stinging from the loss of a young father (43) to the horror that is cancer.  He leaves a loving wife, 4 children and the many wonders of "what if?"

Plenty of people talk of "living each day like its your last."  How many of us really do it?

Find what you are passionate about and dive in head first.

Much love C.A.C.  You will be missed. 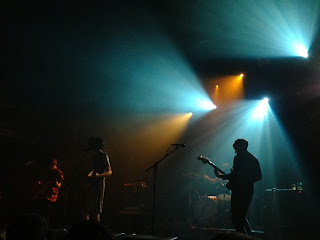 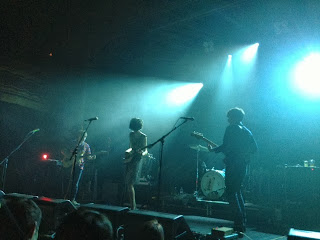 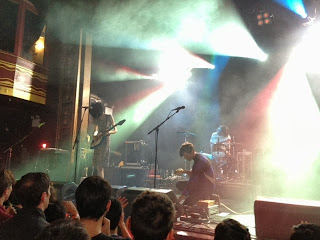 Encore:
Cover Me (Slowly)
Agoraphobia
He Would Have Laughed
Posted by HankB at 8:08 PM