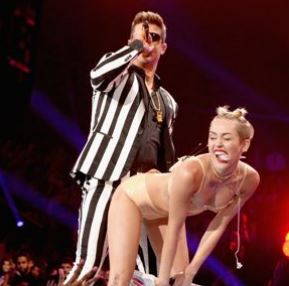 The recent outrage du jour over Miley Cyrus' VMA performance got me to thinking about parenting.

Particularly, I was intrigued by the extreme umbrage over the performance by, and artistic decisions of, a 20 year old multi-millionaire, and the contempt brought not only against her, but the alleged defects of her parents as being somehow responsible for her alleged shortcomings.

We all have heard how ours is the era of "Helicopter Parenting". Parents involved in every aspect of their kid's lives. Doing their homework for them. Arguing with teachers over supposed unfair grades. I have even heard tales from corporate HR professionals of recent college grads having their parents trying to negotiate their starting salary for them!

The driver for all of this, I think, is the excessive anxiety of our over-Communication age, and the excessive need for control to allay this anxiety. And i think this  plays out in our outrage over celebrities like Ms. Cyrus.

George Orwell's Nineteen Eighty Four famously imagined a nightmare dystopian state that kept its citizens as virtual slaves via constant surveillance, control of language, and brutality. However, as a release of tension from this loss of individual control, Orwell's State developed a ritual called the "Two Minutes Hate". Here, citizens would gather and watch a government propaganda film of grotesque characatures of the regime's enemies and get whipped up into a frenzy, until they were calmed by swelling patrotic music and the image of "Big Brother".

I think parents particularly are developing their own "Two Minutes Hate" ritual to release their anxiety. I'd like to suggest that our need for control is unrealistic.

Maybe I can help.

I don't claim to be an expert (As one wit said, "Everyone is an expert on how OTHER parents should raise their kids.") However, I've got two daughters of my own and fully believe that I am screwing them up in some manner. But I have a few principles I try to follow to minimize the damage:

1. If i am parenting the right way, I should become less and less central to my children's lives, and should be almost superfluous by the time they are adults.

2. When they challenge my authority, they are doing exactly what they are supposed to do.

3. If my kids feel that home is a safe place where they know they are loved, i have covered about 90% of parenting.

4. My main job is not to shape and form them into some pre-determined mold, but to help them clear away some weeds and rocks, and provide food, water and sunshine, so they can grow into who they are supposed to be (which, if I may get a little mystical here, was probably mostly set down before they popped out of the oven)

5. While my kids do not have the right to do whatever they want, they have the absolute right to be angry with me, and to disagree with me, so long as it is done respectfully and without malice.

6. When my kids become dating age ( I say with total humility and awareness that when that day comes I may eat every word that follows) my job is to make sure they have the tools and information to limit the possible negative consequences of any decisions they make. As to who they keep company with, so long as that person treats them respectfully, and my kid enjoys spending time with them, i need to stay out of their relationships and let them work out the rest.

7. My kids need to figure out for themselves how to ask other people for help, or how to strike mutually beneficial relationships. I can provide advice, but i can't be the "broker" unless they ask for help.

8. Entertainers do what is called "performing". It is fun to watch people do things in a performance that would not be appropriate to do in real life (My older daughter performs in school plays and musicals, and so understands why the villian is always the most fun role to play) We watch this stuff together and talk about how fun it is to watch it, and talk about what life would be like if you acted that way all the time.

9. I did alot of stuff at a young age that, if my kids did it, would sock me in the gut (and I was a bookwormy late bloomer, not a "wild child") and i need to remember how important it is to be allowed to find one's own way and not freak out.

So let's give Miley, her parents, and ultimately even ourselves a break. We feel out of control because, quite frankly, there is way less under our control to begin with.

And lets stop with the "Two Minutes Hate".